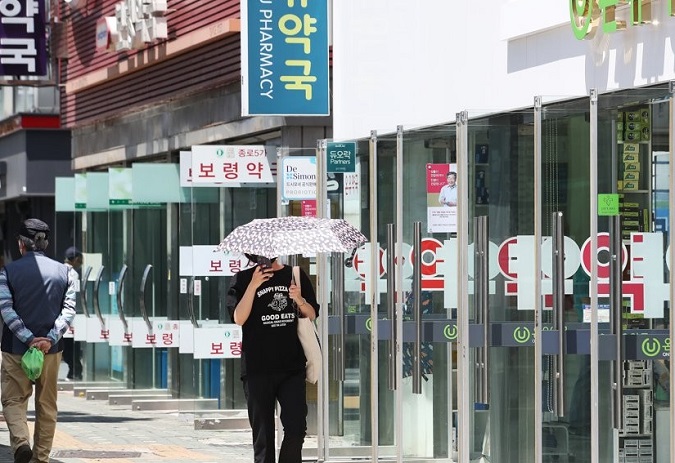 No lines of customers are seen in Seoul’s famous drugstore district in Jongno on June 1, 2020, the first day South Korea lifted the designated day-only purchase rule in its protective public mask rationing. (Yonhap)

SEOUL, June 1 (Korea Bizwire) — No signs of major disruptions such as long queues of customers were spotted at drugstores nationwide Monday, the first day South Korea lifted the designated day-only purchase rule in its protective mask rationing aimed at containing the COVID-19 pandemic.

Starting Monday, South Koreans are entitled to buy three government-distributed protective masks, known as “public masks,” at local drugstores every week without having to visit drugstores on a designated day of the week.

As mask prices skyrocketed amid massive new coronavirus outbreaks here in February, the government introduced the mask rationing system on March 9, allowing nationals to buy at first two and then three masks every week at the price of 1,500 won (US$1.22) each on a designated weekday in accordance with the last digit of their birth year.

On Saturdays and Sundays, masks were available for anyone who did not purchase them during the weekdays.

The government lifted the designated day-only rule in distributing public masks, starting this week, on the back of stabilization in the mask supply as well as the country’s largely flattening curve of COVID-19 cases.

Even as the eased rule on mask distribution went into effect Monday, no lines of customers waiting to buy masks were reported nationwide, a sign that the new rule is likely to take root smoothly.

A street in Jongno, central Seoul, which is known for hosting a cluster of drugstores, remained as uncrowded Monday morning as any other day.

Handwritten signs reading “masks all sold out,” often seen on drugstores’ front doors in the initial phases of the mask rationing system, gave way to new signs saying “public masks available for purchase on any day.”

“In the first stage of the new coronavirus outbreaks, there were long lines already even before the stores opened. After the mask rationing started, such a phenomenon disappeared,” a drugstore worker in the area told Yonhap News Agency.

At another drugstore in Seongdong Ward in eastern Seoul, an ample stockpile of public masks as well as other varieties such as cotton and surgical masks, were on display, waiting for customers to pick up.

“I forgot to wear a mask while coming out for work this morning. It’s such a relief that I can buy a mask to wear to work,” an office worker surnamed Jeong said after purchasing a mask at the drugstore.

He said, “I wish the price (for public masks) would go down as the situation improved.” 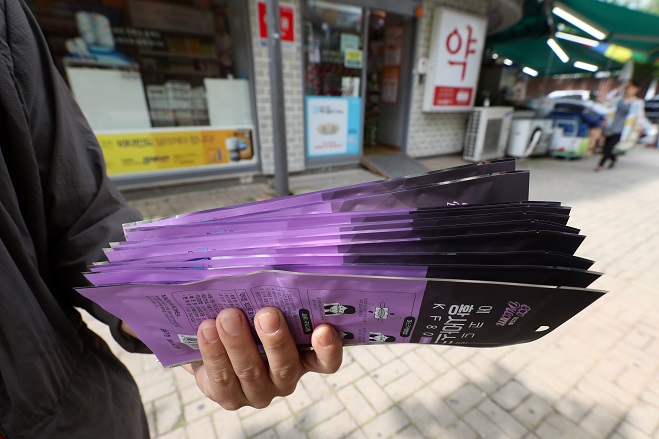 A customer holds a bundle of masks for himself and his family after purchasing them at a drugstore in Gwangju, 329 kilometers south of Seoul, on June 1, 2020. No standing in line was necessary. (Yonhap)

Under the eased mask rationing rules, children and students age 18 and under are entitled to buy up to five masks every week, a special allowance permitted as the country is striving to prevent outbreaks at schools in the belated back-to-school season.

In small towns where drugstores are rare, post offices and supermarkets run by the National Agricultural Cooperative Federation distribute public masks as before.

As of late May, South Korea’s daily mask production rose to some 14.7 million, up 389 percent from December when the production reached about 3 million per day.

As the summer season approaches, South Korea is also planning to double the country’s production of surgical masks, which are slightly less effective in blocking droplets of saliva but better for breathability.

The targeted distribution is nearly 1 million every day.