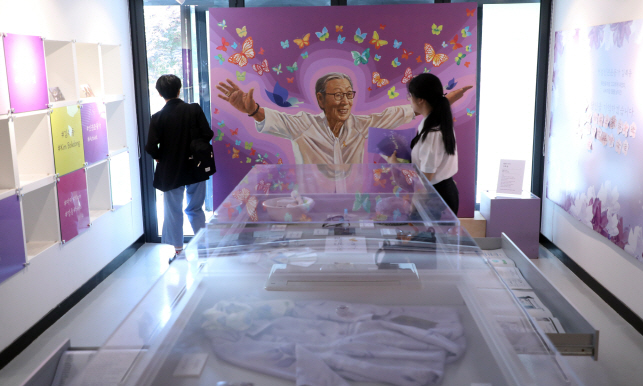 An exhibition of the late Kim Bok-dong’s life. (Yonhap)

According to the Korean Council for Justice and Remembrance (KCJR), the Kim Bok-dong Center will be built on a lot covering about 1,250 square meters in the Gulu district of the central African country next year.

Kim, who died in January at 93, is considered a symbolic figure in Korea and worldwide for her monumental work in disseminating the truth about sexual enslavement and her active role in promoting women’s rights issues, especially for those who have experienced wartime sexual violence in recent decades.

The center will feature Kim’s memorial, a history pavilion on Japan’s wartime sex slavery, a pavilion on Uganda’s civil war, a school and a farm.

The KCJR said it has selected Uganda as the site of Kim’s memorial hall in an effort to help spread international awareness of the problem of wartime sexual violence and join forces with Ugandan women who have suffered from two decades of civil war.

Golden Women Vision, a civic group in Uganda, will also take part in the construction of Kim’s memorial in the African country, it added.

Meanwhile, the KCJR held an awards ceremony in Seoul Wednesday for Vasfije Krasniqi-Goodman, an activist belonging to the Kosova Rehabilitation Center for Torture Victims, who was selected in May as the winner of the 2019 Kim Bok-dong Peace Prize.

The prize was established last year to honor individuals and organizations credited with supporting victims of wartime sexual violence in accordance with Kim’s spirit for peace and women’s human rights.

Vasfije was the first person to publicly narrate her trauma of sexual violence during the Kosovo War.

She was raped by Serbian police when she was 16 years old and has since continued the movement for the realization of justice through punishment of the perpetrators as well as various events.