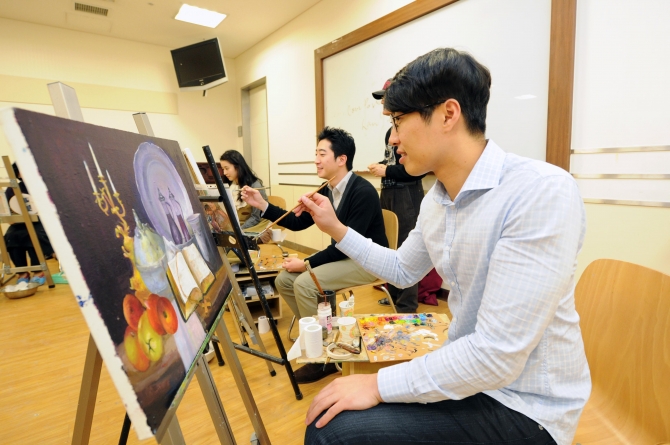 According to Hyundai Department Store, 52 percent of people who enrolled for one-day classes at its culture centers for the fall semester were in their 20s and 30s.

“As more workers have spare time, they seem to be trying to find a hobby through our one-day classes,” a company official said. “Increasing numbers of young workers are taking two or more one-day lessons as a trial and registering for regular courses.”

Shinsegae Department Store also said people in their 20s and 30s accounted for 20 percent of the total attendees at its culture centers in the spring semester, more than double from the comparable figure from last year, which stood at 8 percent.

To cope with the rising demand, Shinsegae said it has increased the number of weekday evening classes for the fall semester 10 to 15 percent on-year.

The latest change came as South Korea adopted a new workweek in July, requiring both private and public companies with 300 or more employees to reduce the maximum working hours to 52 per week, from the previous 68 hours. Under the new system, employees can work up to 40 hours of regular work and 12 hours of extra work.

Retailers said the increasing number of people seeking their culture classes is expected to contribute to their sales growth.