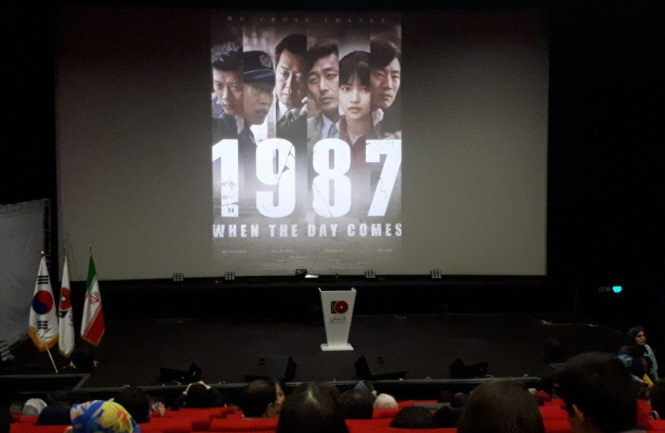 1987, a movie about the democratization movement in South Korea, was approved for screening by the Iranian government. (image: Yonhap)

The festivities will go on for four days to screen eight Korean movies, including “Little Forest”, “Forever the Moment”, “The King of Jokgu”, and “Breathing Underwater”.

Lim Soon-rae, the director of “Little Forest” and “Forever the Moment”, Korean actress Moon So-ri, who appeared in the films, and other Korean filmmakers participated in the opening ceremony.

What was notable in the festival was that 1987, a movie about the democratization movement in South Korea, was approved for screening by the Iranian government.

Iran has been particularly sensitive about importing cultural content from overseas, regarding it as part of schemes to silently overthrow the government. Iran is also known for strict restrictions on assembly and demonstration.

When South Korea’s candlelight protests attracted attention around the world in 2016, Iranian media refrained from airing scenes of demonstrations, and focused on the progress with the investigations by the Korean Prosecutor’s Office, due to concerns that such precedents could lead to unrest in the country.

For the Iranian media, the only demonstrations of interest are rallies against the United States or Israel.

While they were sufficient reasons for the Iranian government to ban the South Korean movie, 1987 was allowed to hit the screens, contrary to prior expectations.

“The Iranian government applied strict limitations on female exposure and religious content, but they didn’t raise any objections against 1987,” said a source from the South Korean embassy in Iran.

“They probably saw that the 1987 democratization movement in South Korea was similar to the 1979 Islamic Revolution in Iran, which was also led by students to overthrow a corrupt regime.”

The Iranian regime went through turbulent changes when the pro-West Pahlavi monarchy was replaced by the Islamic Republic.

Jang Joon-hwan, director of 1987, will also be participating in the festival.