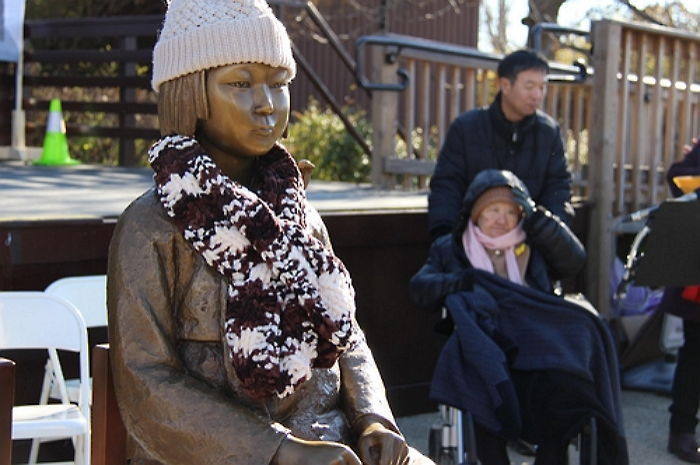 A statue of a ‘comfort woman’ in Washington. (image: Yonhap)

Professor So-young Irene Lee of Soonchunhyang University Hospital, who led a team of researchers, revealed the results of the study in the April edition of “Psychiatry Investigation,” the academic journal published by the Korean NeuroPsychiatric Association.

According to the findings, 65 percent of the respondents (13 women) were diagnosed with posttraumatic stress disorder (PTSD).

The women’s prevalence rate (rate that an illness would occur more than once in a lifetime) for PTSD stood at 90 percent.

This means most of the victims had suffered from PTSD once or more, and that more than half still suffer from the illness.

The research team explained that the women’s PTSD prevalence rate was serious, exceeding those displayed by survivors of the World War II or the Holocaust.

The team cited previous overseas studies that found the PTSD prevalence rate of World War II survivors to be 1.9 percent, while the same rate for those who survived the Holocaust was 42.35 percent.

The Korean research team, while acknowledging that a simplistic comparison is rather difficult, said that the prevalence rate of PTSD in comfort women was shown to be much higher than other PTSD victims.

One research participant attributed the findings to the victims’ age at the time of the sexual trauma.

“The high rate of prevalence may be attributed to the fact that the women were between 12 and 19 years of age and were subject to repeated sexual abuse,” said the researcher.