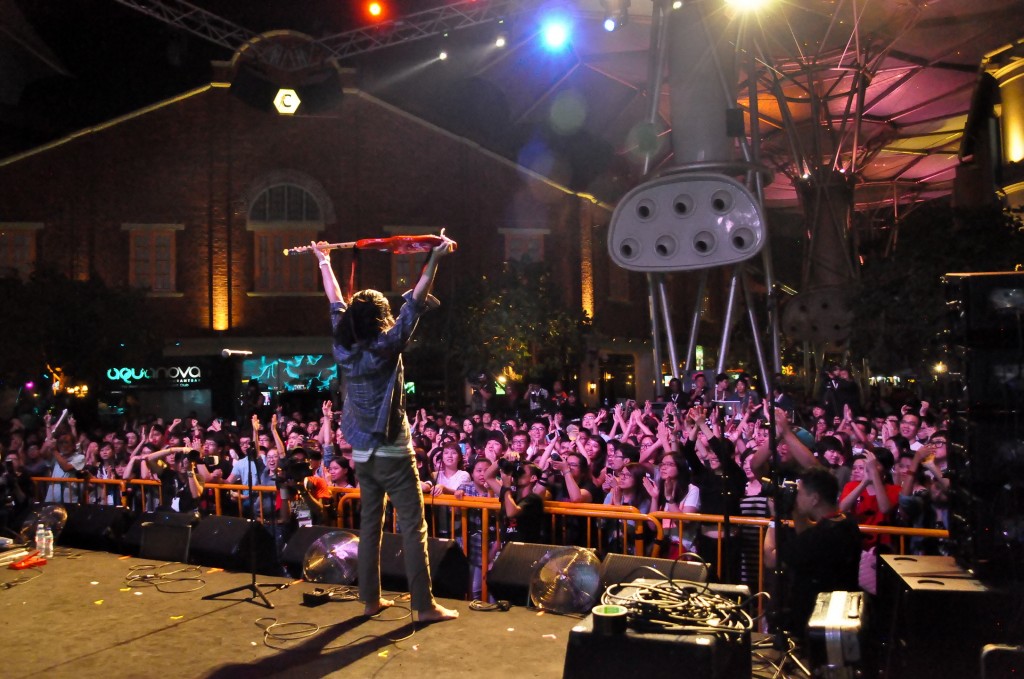 The “K-pop Night out at Music Matters Live 2014″ event held between 8 and 11 pm on the day featured several top-class K-pop musicians and bands such as Jaurim, Daybreak, Lim Kim, Sultan of the Disco, and Asian Chairshot. (image: Korea Creative Content Agency)

SEOUL, May 27 (Korea Bizwire) – The Ministry of Culture, Sports, and Tourism and Korea Creative Content Agency sponsored a K-pop event “Music Matters” in the night of May 23 held at Clarke Quay, Singapore, in which more than 2,000 visitors and 500 music industry people from across the world gathered.

The “K-pop Night out at Music Matters Live 2014″ event held between 8 and 11 pm on the day featured several top-class K-pop musicians and bands such as Jaurim, Daybreak, Lim Kim, Sultan of the Disco, and Asian Chairshot.

The music industry executives and producers who attended the venue were there to discover new talents for their markets. The first performers on stage were the three Asian Chairshot members who are popular among rock music fans at home and elsewhere. It was then followed by the performance of Sultan of the Disco, the five-man indie band famous for their appearance in Glastonbury Festival.

Lim Kim, a young phenom who debuted as a solo singer after winning a third-place prize in the Superstar K3 singing competition, showed off her talent on the stage. Another four-men indie band Daybreak brought up the heat level in the riverside venue. The grand finale was featured by Jaurim, the four-member rock band that has been popular since the late 1990s. Female vocalist Kim Yoon-Ah captivated the whole audiences with her explosive voice and dominating stage manners.

Jasper Donat, CEO of Music Matters, said, “It has been three years since we began the K-pop Night out event, but it’s amazing to see so many performers with originality and diverse music genres. I believe K-pop will grow into an important part of the global music market beyond the status as a unique Asian niche.”

Hwang Kyu-seok, president of Common Music, a record label, said, “The showcase in the form of K-pop Night out is an effective tool to promote K-pop to other markets. I hope to see more K-pop contents overseas and keep the Korean Wave momentum going.”

The Ministry of Culture, Sports, and Tourism and Korea Creative Content Agency have been holding B2B showcases in the world’s three major music markets including Marché International du Disque et de l’Edition Musicale (MIDEM) in Cannes, France, and South by Southwest (SXSW) in Austin, the United States, as well as Music Matters in Singapore.