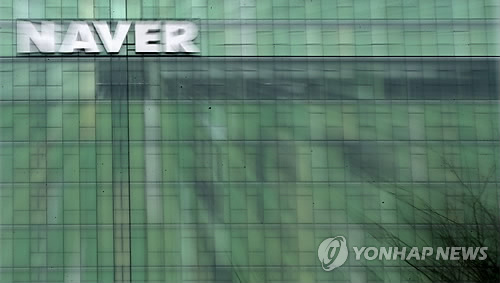 In its latest report on the protection of private information, Naver said state authorities had issued 9,342 search warrants against it in 2014, up more than six-fold from 1,487 in 2012. (Photo courtesy of Yonhap)

In its latest report on the protection of private information, Naver said state authorities had issued 9,342 search warrants against it in 2014, up more than six-fold from 1,487 in 2012.

This is the first time that Naver has made public specific figures on search and seizure warrants sought against it.

Daum Kakao, the operator of popular messaging service Kakao Talk, found itself at the center of controversy over cyber censorship last fall, when it declared it would not cooperate with state investigators seeking to monitor chat records, even when they had search warrants.

Lee Sirgoo, the co-CEO of Daum Kakao, was later questioned on charges of allowing child pornography to be shared on Kakao Group, a private group communication app, with critics charging that authorities were retaliating against Daum Kakao for its incompliance.

Daum Kakao is scheduled to release its first transparency report on Friday.

Naver revealed that the number of warrants issued went up dramatically in late 2012 and early 2013 as authorities sought alternative means to obtain user information after the company stopped providing personal communication data such as names and residential registration numbers. The Supreme Court ruled in December 2012 that communication firms are not obligated to provide such information, and Naver hasn’t complied with search warrants since.