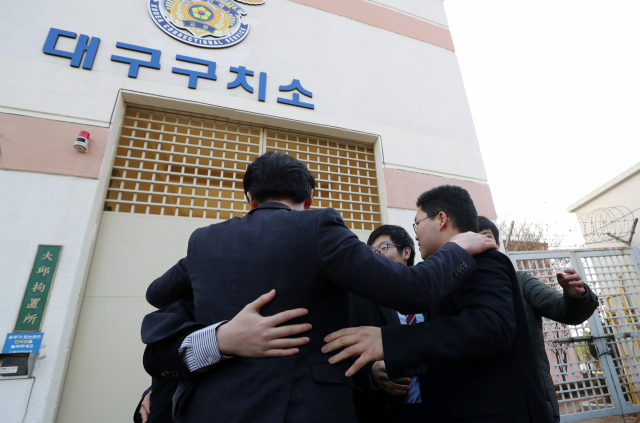 A conscientious objector rejoices with family members after being released on parole from a detention house in Daegu, 300 kilometers southeast of Seoul, on Nov. 30, 2018. Fifty-eight people who were jailed for refusing to serve through the country’s military draft were freed on the day following the Supreme Court’s Nov. 1 ruling that religious and conscientious beliefs are valid reasons for refusing to serve. (Yonhap)

SEOUL, Feb. 26 (Korea Bizwire) — A total of 984 people have been approved to substitute their mandatory military service for other public service due to their religious and other personal beliefs since a related act took office in 2019, the military manpower agency said Friday.

By law, all able-bodied South Korean men must carry out military service for about two years.

But the National Assembly passed a bill allowing those who refuse to take up arms for religious or other personal beliefs to do other forms of service without punishment.

The Military Manpower Administration (MMA) then launched a review committee in June 2020 and allowed 984 conscientious objectors to do the alternative service until now.

Of them, 982 cited their religion as a reason for the application, and two their personal belief in nonviolence, according to the committee.

Instead of serving in the military, they work at local correctional facilities for 36 months. The first group of such objectors began their duty in October last year.

“The alternative service is not evading the mandatory duty but another way of fulfilling the obligation,” the committee said. “We will do our best to protect rights of conscientious objectors and to create a culture of fulfilling the duty.”