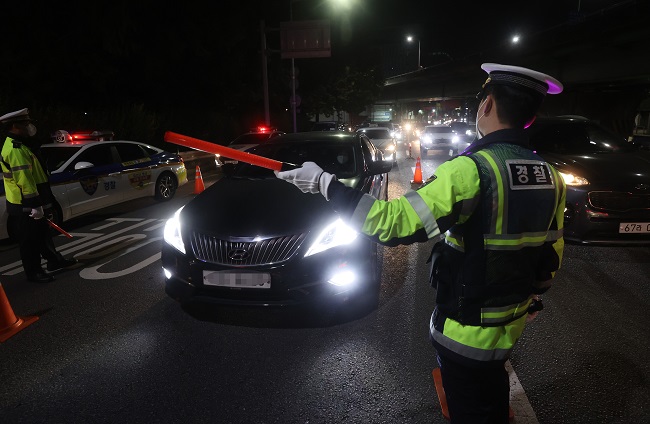 Police officers check vehicles for drunk driving at a DUI checkpoint in Seoul on Nov. 6, 2021. (Yonhap)

SEOUL, Nov. 6 (Korea Bizwire) — Nearly 1,500 people were caught while driving under the influence (DUI) in the first four days after the country lifted business hour restrictions and raised the cap on private gatherings under its “living with COVID-19″ scheme, police said Saturday.

A total of 1,486 people were busted for DUIs between Monday and Thursday, according to the police, with 384 of them having blood alcohol content levels high enough to have their licenses suspended and the rest with levels warranting having them revoked.

South Korea began the first of three stages to gradually phase out coronavirus restrictions Monday under its living with COVID-19 policy in an effort to return to normalcy.

Under the first phase, operation hour curfews on cafes and restaurants have been fully lifted, while ceilings on private gatherings have been raised to a maximum of 10 people in the greater Seoul area and 12 in other regions.

The authorities also adopted the “vaccine pass” system, in which visitors have to show they have been fully vaccinated or have a negative test result when they enter high-risk facilities like nightlife establishments.

Police said a total of 279 people were caught for violating social distancing rules over the same four-day period.

With rules on massive gatherings and rallies also eased, the number of outdoor rally notifications filed with police has also increased significantly.

Under the eased virus rules, the gathering limits on civic and political rallies were raised to a maximum of 499 people if all the participants are fully vaccinated.

Before this month, rallies and demonstrations, except for one-person protests, were banned across Seoul as part of authorities’ anti-coronavirus campaign.