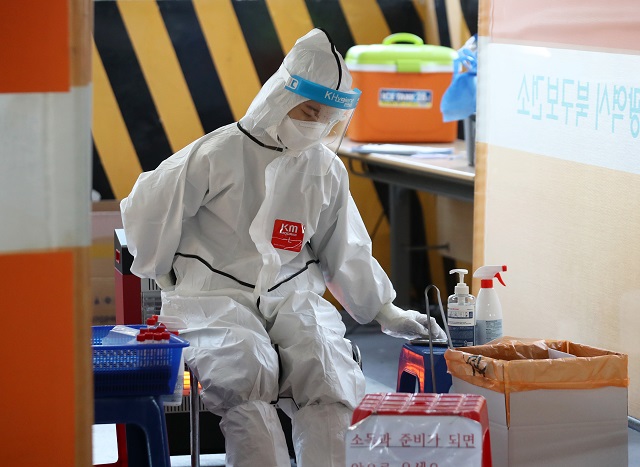 A medical worker warms her hands in front of an electric heater at an outdoor COVID-19 testing station in Gwangju, 329 kilometers south of Seoul, on Dec. 27, 2021. (Yonhap)

SEOUL, Dec. 28 (Korea Bizwire) — South Korea’s new coronavirus cases fell below 4,000 for the first time in 28 days Tuesday due partly to antivirus restrictions and fewer tests over the weekend, but the number of critical cases remained high.

The country added 3,865 new COVID-19 infections, raising the total caseload to 615,532, according to the Korea Disease Control and Prevention Agency (KDCA).

The figure marked the first time daily cases fell below 4,000 since Nov. 30, and represented a sharp decline from a daily record high of 7,849 on Dec. 15. The number of new daily cases usually shrinks at the beginning of the week due to less testing over the weekend.

The number of critically ill COVID-19 patients slightly rose to 1,102 after reaching an all-time high of 1,105 on Saturday, the KDCA said. Critical cases have stayed above 1,000 for eight consecutive days.

The country added 46 more deaths from the pandemic, bringing the death toll to 5,346. The fatality rate stood at 0.87 percent.

Health authorities and local governments, meanwhile, had reported 4,711 new cases as of 9 p.m., up 1,172 from the same time the previous day, apparently as more tests are carried out on weekdays.

The greater Seoul area accounted for 70 percent of new cases. Daily cases are counted until midnight and announced the following morning.

The self-quarantine period for those who come into close contact with a confirmed patient or an individual confirmed to have the omicron variant will be shortened from the current 14 days to 10, health officials said.

The bed occupancy rate in intensive care units for COVID-19 patients in the greater Seoul area stood at 81.1 percent as of 5 p.m. on Monday, slightly down from 83.6 percent from the same time a day earlier.

A figure higher than 75 percent is considered to have surpassed the saturation point.

“Our top priority is to reduce the number of deaths and patients under critical conditions,” Health Minister Kwon Deuk-cheol told reporters, adding the government will make efforts to supply enough hospital beds so people can receive necessary treatments without delay.

“When the country launched the return-to-normalcy scheme, we did not expect a surge in the number of severely ill patients,” Kwon said. The government will also review its readiness against the omicron variant, which can potentially rise as the dominant strain, he added. 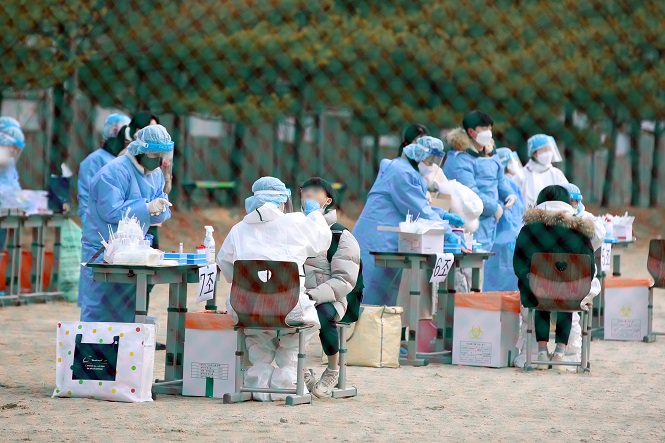 On Dec. 18, the government reimposed a set of revised virus restrictions across the country, which will remain in effect until Jan. 2 to stem the spread of the virus.

It marks a reversal of the government’s “living with COVID-19″ scheme that began early last month with an aim to return to normalcy by relaxing virus restrictions in phased steps.

Under the new measures, the maximum size of private gatherings is limited to four people nationwide, from the previous limit of six in the capital area and eight elsewhere.

A 9 p.m. or 10 p.m. curfew is applied to businesses as well, depending on their type of service.

Health authorities put the risk level of the pandemic in the country over the past week at the highest level for five weeks in a row. The authorities will decide Friday whether to extend the current distancing guidelines.

Of the locally transmitted cases, Seoul reported 1,254, while 1,045 came from the surrounding Gyeonggi Province and 233 from Incheon, 40 kilometers west of Seoul.

The KDCA said 88 cases came from overseas, raising the caseload to 16,995.

As of Tuesday, 85.8 percent of the country’s 52 million people had received their first shots of COVID-19 vaccines, and 82.5 percent had been fully vaccinated, while 31.1 percent had gotten booster shots, the public health agency said.

South Korea has been urging people to get booster shots, especially senior citizens, to better protect themselves from COVID-19.

Earlier this week, health authorities said the number of critical cases and deaths could drop in one or two weeks on account of increased booster shots.

The KDCA said 4.88 million doses of Pfizer vaccines are expected to arrive at Incheon International Airport on Wednesday, bringing the accumulated vaccine arrivals to 117.4 million.