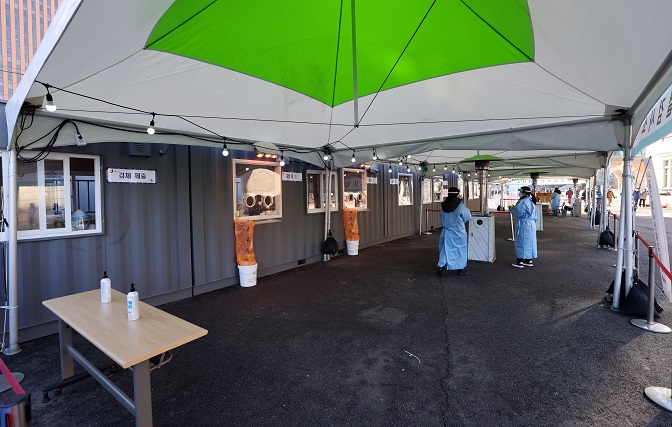 Health workers prepare to work at a makeshift virus testing facility in Seoul on Jan. 19, 2021. (Yonhap)

The country added 386 more COVID-19 cases, including 351 domestic infections, raising the total caseload to 73,115, according to the Korea Disease Control and Prevention Agency (KDCA).

The third wave of COVID-19 here reached its peak on Dec. 25 at 1,240 but has been showing signs of a slowdown since.

The daily figure stayed in the 500s over the past week before it dropped to a nearly two-month low of 389 on Monday.

In the past week, the country reported a total of 3,822 cases, down 1,519 from the number of cases reported between Jan. 3 and 9, KDCA data showed. Last week, infections tied to nursing homes and hospitals reached 341, down 237 from a week earlier.

Later in the day, health authorities and local governments said 377 new cases were confirmed from 12 a.m. to 9 p.m. Tuesday, up from 348 posted over the same period on the previous day.

The greater Seoul area accounted for 77.5 percent, with the capital city finding 140 new patients, up from 97 a day earlier. Monday’s figure was lower than usual, due apparently to fewer tests carried out over the weekend.

At this pace, the daily figure that will be released early Wednesday is expected to hover around 400, considering that 83 more cases were confirmed after 9 p.m. on Monday.

“We are afraid of people letting down their guard against the virus,” Sohn Young-rae, a senior health official, said. “There is a downward trend, but we cannot be relieved. If the situation gets loosened, there is a possibility that infections can spread again.”

The country extended its tougher social distancing measures for two more weeks, while easing some restrictions on cafes, gyms and other indoor facilities that have suffered revenue losses.

Under the new measures, the capital area is be under Level 2.5, the second highest in a five-tier system, and the rest of the nation remains under Level 2.

However, indoor gyms, cram schools and karaoke establishments are allowed to reopen on the condition that they strictly adhere to antivirus measures, including a maximum capacity of one person per 8 square meters and a closing time of 9 p.m. 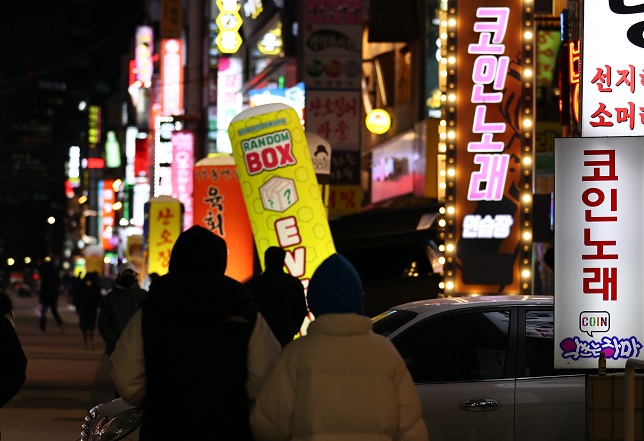 Signs for coin-operated karaoke rooms are illuminated in Seoul on Jan. 18, 2021, as health authorities eased restrictions on cafes, gyms and other indoor facilities the same day amid signs of a letup in new coronavirus cases. (Yonhap)

Of the locally transmitted cases, the capital city of Seoul accounted for 95 cases, and the surrounding Gyeonggi Province took up 128.

Incheon, west of Seoul, had 18 new cases. The greater Seoul area accounts for around half of the nation’s 51 million population.

The number of cases linked to a church in Yongin, south of Seoul, rose by seven to 216, while infections tied to Dongbu Detention Center in southeastern Seoul reached 1,223 after the confirmation of two more cases.

There were 35 cases from overseas, up 12 from a day ago, raising the total number of imported cases to 5,980.

Of the newly confirmed imported cases, 16 were from the United States.

As of Monday, the authorities have confirmed 15 cases of a COVID-19 variant first discovered in Britain and two variant cases from South Africa, along with the first case of another variant believed to have originated in Brazil.

The authorities said the ban on flights from Britain will be extended for another week until Jan. 28.

Starting Monday, South Koreans departing for home from Brazil will also be required to submit a certificate proving they tested negative for COVID-19 when they arrive.

All arrivals from Brazil will also need to receive diagnostic tests at temporary shelters and be isolated until they are confirmed to be virus-free, according to the authorities.

Such measures have been already applied to arrivals from Britain and South Africa since last week.

The country added 19 fatalities, up four from a day ago, upping the virus death toll total to 1,283. The fatality rate was 1.75 percent.

The number of seriously or critically ill COVID-19 patients came to 335, down eight from a day earlier.

The total number of people released from quarantine after making full recoveries was 59,468, up 745 from a day earlier, with 12,364 people being isolated for COVID-19 treatment, down 378 from a day ago.