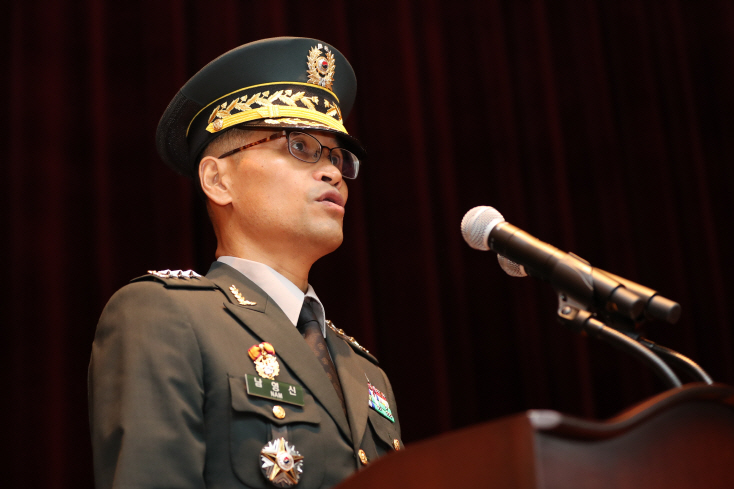 Lt. Gen. Nam Young-sin, the commander of the Defense Security Support Command, speaks during a ceremony to launch the unit in Gwacheon, Gyeonggi Province on Sept. 1, 2018. (image: Yonhap)

SEOUL, Sept. 2 (Korea Bizwire) — The newly minted security intelligence unit will be banned from monitoring military personnel and keeping their records, and install a whistleblowing system as part of efforts to ensure its political neutrality, officials said Sunday.

The DSSC is tasked with gleaning military intelligence needed to counter any activities harmful to national security, such as espionage. Its predecessor had long been accused of abusing its authority to serve the interests of political leaders.

The official instructions that govern the DSSC operation bar DSSC operatives from surveilling the military personnel, including civilian workers, and keeping their records, which critics said had enabled the DSC to wield inordinate authority prone to abuse.

“Surveillance (of military personnel) itself was an authority that is ridiculous,” Nam Young-sin, the DSSC commander, said during a meeting with reporters.

“We will review the records (that have been collected so far), keep only what is needed for our investigation and turn the rest over to archives,” he added.

The instructions will also limit the DSSC’s authority to conduct background checks of the military personnel. The new command will thus be able to carry out such checks only in cases of corruption or illegal activities by military staff.

Under the new command structure, the DSSC chief will report any intelligence to the presidential office Cheong Wa Dae after briefing the defense minister. The DSC chief used to report directly to Cheong Wa Dae without the minister’s knowledge, triggering speculation that the unit was meddling in politics.

The instructions also codified a series of obligations for the DSSC staff, such as maintaining political neutrality, banning the illicit collection of information on civilians, protecting human rights and giving up any sense of privilege.

Also in the instructions is a right for the DSSC members to file a complaint with the internal inspector about any inappropriate order that could potentially lead to political interference or surveillance of civilians.

Lee Yong-il, a former chief of the Yeoju division of the Suwon District Prosecutors’ Office, has been appointed as the first DSSC inspector.

The new command now has some 30 provincial branches, compared with its precursor’s 50 regional wings. The number of its staff is around 2,900, a 30 percent reduction from that of the DSC.

The DSSC now has six general-grade officers, whereas the DSC had nine.

What triggered the DSC disbandment were the revelations that the scandal-ridden command drew up a document about the possible imposition of martial law last year to quash public protests that called for the dismissal of then corruption-tainted President Park Geun-hye.

The document, which many say reeked of the country’s past military authoritarianism, entailed detailed emergency procedures, such as censoring the media, seeking support from foreign diplomats here and precluding the parliament from lifting martial law.