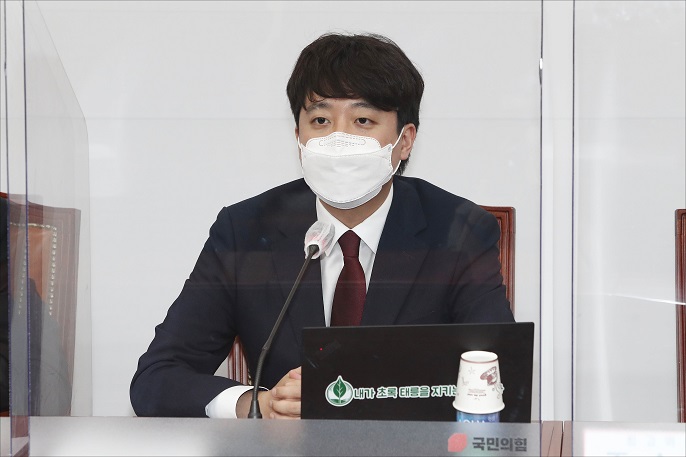 Lee Jun-seok, chairman of the People Power Party, speaks during the party’s supreme council meeting at the National Assembly in Seoul on June 14, 2021. (Yonhap)

SEOUL, June 14 (Korea Bizwire) — Lee Jun-seok, the main opposition People Power Party’s young new chairman, on Monday committed to provide a “big tent” for opposition presidential candidates from both inside and outside the party.

“A (potential) integration of opposition forces centered on our party is coming into view,” Lee said during a meeting of the party’s supreme council, which he presided over for the first time since taking office last week.

“My vision lies in establishing a big tent that could (bring together) an abundant number of excellent (opposition) presidential runners from outside the PPP as well as those inside the party … to stand up against the Moon Jae-in government,” Lee said.

The remarks came as the PPP has been weighing options to embrace presidential candidates from the outside as means of raising its chances of victory at next March’s presidential election, such as former Prosecutor General Yoon Seok-youl and Ahn Cheol-soo, the chief of the conservative minor People Party.

“The PPP leadership has a lot to do to achieve a presidential election victory,” Lee said, adding the party’s proposed merger with the People Party would be one of the PPP’s “top priority” tasks.

During the party meeting, the new chairman also committed to pursue a change of culture within politics, saying that the challenge of conventional norms should become the new standard of South Korean politics.

“(The PPP) should be a container where various different thoughts can co-exist, and expectations for things new, rather than fears of changes, should be our new language,”

“The unconventionality, which we will be carrying out from today onward, should go beyond the notion of novelty and become the new standard of Yeouido,” he noted, referring to the namesake district in western Seoul, which houses the National Assembly, as well as the headquarters of rival political parties. 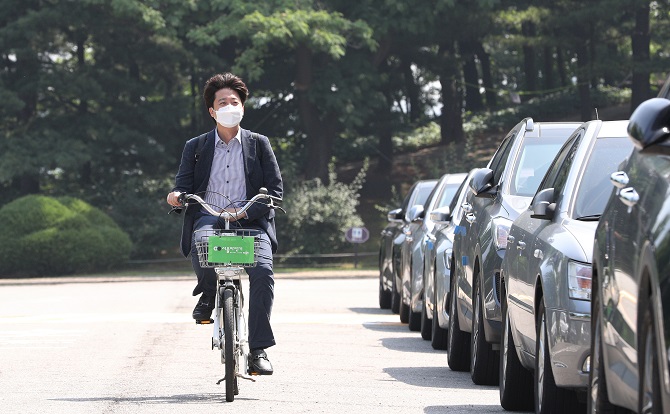 Lee Jun-seok, chairman of the People Power Party, rides a bike to the National Assembly in Seoul on June 13, 2021. (Yonhap)

He became the youngest-ever leader of a mainstream political party in South Korea.

Lee again captured media headlines Sunday for showing up for work at the National Assembly on a bicycle, as opposed to traveling in a chauffeur-driven sedan as heavyweight politicians often do.

He was using a bike sharing service operated by the Seoul city government.

“I didn’t know my bicycle ride would draw such big attention,” Lee noted.

“It will be difficult to legislate regulations on or nurture new industries such as last mile transportation, including bike sharing, without deep knowledge about them,” he said, vowing to explore new-generation agenda items that have been disregarded by mainstream politicians so far.