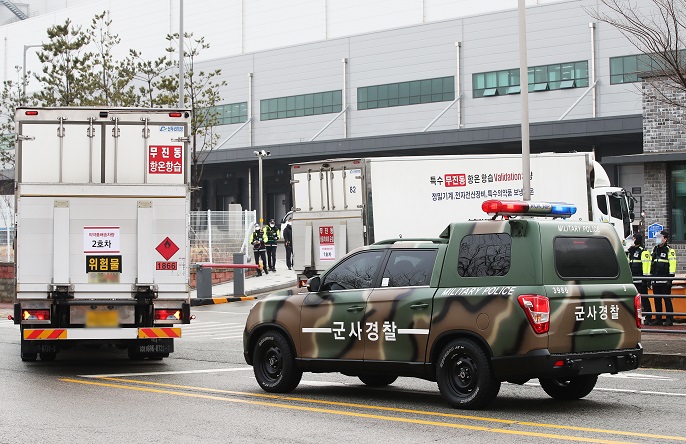 This photo taken Feb. 1, 2021 shows delivery vehicles in a training simulation held in Pyeongtaek, some 70 km south of Seoul, for the delivery of coronavirus vaccines. (Yonhap)

SEOUL, Feb. 1 (Korea Bizwire) — South Korea’s daily new coronavirus cases rose by the smallest amount in over two months to stay in the 300s for the second straight day on Monday due to fewer tests over the weekend amid extended tough virus curbs.

The country added 305 more COVID-19 cases, including 285 local infections, raising the total caseload to 78,508, according to the Korea Disease Control and Prevention Agency (KDCA).

The figure fell from 355 cases Sunday, 458 Saturday and 469 Friday. On Sunday, the tally fell back to the 300s for the first time in five days. Monday’s daily caseload also marks the lowest since Nov. 23 when the corresponding figure was 271.

Cases tied to IM education facilities came to 384 as of noon, up five from the previous day. Infections traced to a general hospital in eastern Seoul rose 16 over the past 24 hours to 47.

Patients linked to a nursing home in the southern port city of Busan reached 84, up two from a day earlier.

As of 9 p.m. Monday, the country added 297 more cases, up 41 from the same time Sunday, according to the health authorities and local governments.

The capital area accounted for 204 new infections, with 120 in Seoul, 76 in Gyeonggi Province and eight in Incheon, west of the capital.

The daily number of cases for Monday is expected to exceed 300 considering there are three hours left till midnight. On Sunday, 49 cases were additionally reported till midnight, bringing the total to 305.

South Korea had managed to bring two waves of virus infections under control since the pandemic began early last year, but health authorities are struggling to contain the current wave because cluster infections continue to emerge in the densely populated capital area.

Amid a flare-up in virus cases, authorities on Sunday extended Level 2.5 social distancing rules, the second highest in its five-tier scheme, in the greater Seoul area, home to half of its 51.6 million population, and Level 2 measures in other regions for another two weeks until Feb. 14.

Under the extended rules, private gatherings of more than five people are banned across the country during the designated period.

The KDCA expects the ban on private gatherings will help stem the spread of the virus during the Lunar New Year holiday, which falls on Feb. 11 and runs through Sunday, as Koreans travel across the nation to meet their family members and relatives.

In its latest efforts to contain the pandemic, the country will get enough Pfizer vaccine doses for 60,000 people as early as mid-February and enough AstraZeneca vaccine doses for up to 2.19 million people in the first half of this year. 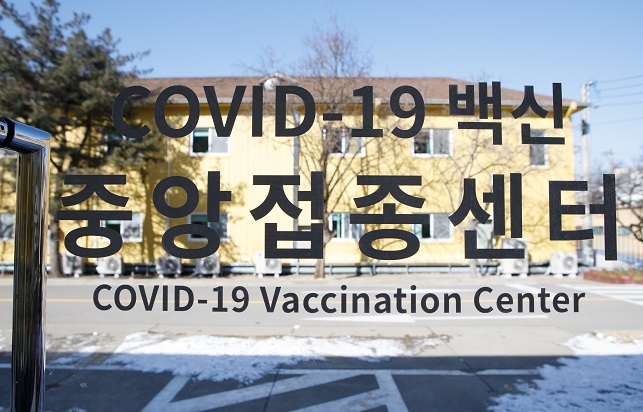 This photo taken Feb. 1, 2021, and provided by the National Medical Center, shows a COVID-19 vaccination center at the state-run hospital in Seoul.

After the third wave of the pandemic peaked at a record high of 1,241 on Dec. 25, new virus infections have been slowing down.

But authorities believed relaxing the curbs runs the risk of an uptick as cluster infections have continued to pop up at religious facilities, hospitals and other risk-prone establishments.

The country, meanwhile, added 20 imported cases, increasing the total to 6,328. Eight cases came from Asian countries excluding China, followed by five from the United States, four from Europe and three from Africa.

The country added five more deaths, raising the total to 1,425. The fatality rate was 1.82 percent.

The number of seriously or critically ill COVID-19 patients reached 225, down from 229 a day earlier.

The total number of people released from quarantine after making full recoveries stood at 68,309, up 431 from the previous day.

Health authorities also said they found seven more cases of the COVID-19 variants — four from Britain, one from South Africa and two from Brazil — bringing the caseload of mutant viruses to 34 in the country.

South Korea has extended the ban on passenger flights arriving from Britain until Feb. 11, which has been in place since Dec. 23, to block the new virus variant that was first identified in Britain.

The pandemic, which started in China in late 2019, has killed more than 2.2 million people worldwide and infected nearly 103 million as of Jan. 31, 2021, according to a tally from Johns Hopkins University.