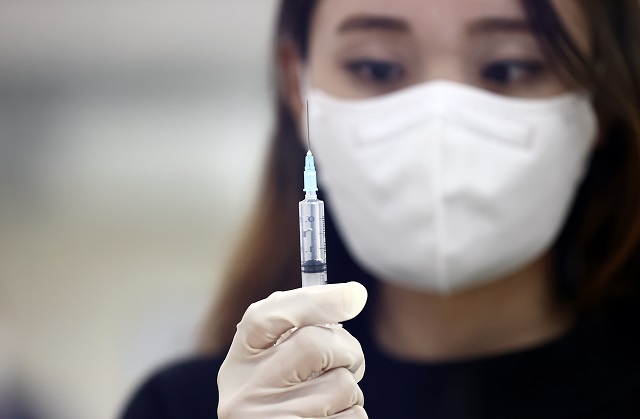 A participant holds a needle during a COVID-19 vaccination educational program for nurses in Seoul on March 4, 2021. (Yonhap)

The daily caseload was down from 444 cases recorded Wednesday and 424 cases Thursday.

The country added eight more deaths from COVID-19, raising the total to 1,627. The fatality rate was 1.78 percent.

South Korea reported more than 1,000 daily cases in late December before it saw a downward trend. The daily tally has been largely stagnant recently, staying around 300 and 400.

Later in the day, health authorities and local governments said 389 new cases were confirmed from 12 a.m. to 9 p.m. Friday, eight more than the same time Thursday. Daily tallies are counted until midnight and announced the next morning.

The country has administered vaccinations to a total of 225,853 people since launching a mass vaccination campaign last Friday, with an additional 67,153 getting the shots Thursday, according to the KDCA. The country’s vaccination rate is now at 0.43 percent.

The vaccination campaign is expected to pick up pace as more people in COVID-19 vaccination priority groups, including medical workers and patients at nursing homes, get the shots. The country aims to achieve herd immunity by November.

The KDCA said some 2.1 million doses of AstraZeneca vaccines for 1.05 million people will be supplied to South Korea by May, with 690,000 doses scheduled to arrive this month under the World Health Organization’s global vaccine COVAX Facility project.

One million doses of Pfizer’s vaccine will be imported this month, with an additional 6 million doses to be supplied here in the second quarter of the year, the KDCA added.

A total of 1,578 cases of side effects after vaccinations have been reported so far, up 860 from a day earlier, although 1,558 of them were mild symptoms.

An additional six suspected cases of anaphylactoid reaction, which has similar symptoms to anaphylaxis, a serious allergic reaction after immunization, have been reported, raising the total of such cases to 13.

Health authorities are looking into seven cases of deaths reported after vaccinations, adding that a potential causal relationship between the vaccinations and the deaths will be investigated.

Amid the vaccination push, health authorities are still worrying about a potential uptick in new cases in spring as citizens, weary of year-long virus curbs, may have more contact with one another.

Although concerns of cluster infections persist, health authorities said they will allow visitations to nursing homes if visitors wear protective gear and have tested negative for the virus.

“People’s movements are increasing after the Lunar New Year holidays,” Yoon Tae-ho, a senior health official, said. “We are seeing stagnation in new virus cases, but we cannot rule out the possibility that infections can surge again.” 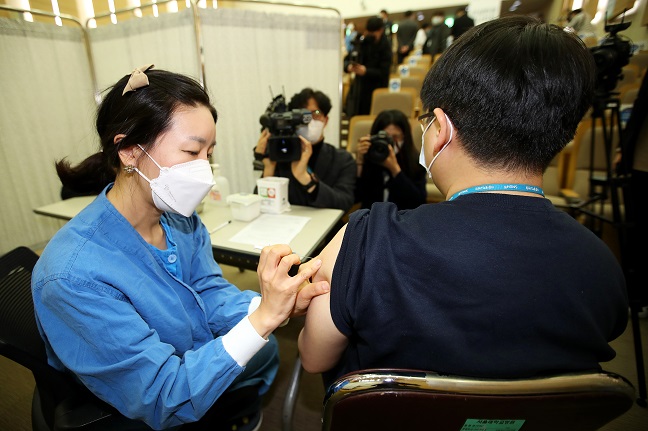 A nurse gives a COVID-19 vaccine shot to medical workers at Seoul National University Hospital in Seoul on March 4, 2021, in this photo taken by the joint press corps. (Yonhap)

Health authorities are also closely monitoring the spread of more contagious COVID-19 variants. As of Thursday, the country had confirmed 162 such cases since confirming the first variant case in October, with six of them being identified this week.

To stem the further spread of the new coronavirus, the country extended its social distancing rules, including bans on private gatherings of five or people, through March 14.

The country unveiled a draft for a four-tier social distancing system that allows merchants, such as cafes and restaurants, to do business under voluntary containment efforts.

The revamped rules will be applied if the spread of the virus slows down and health authorities impose the revamped Level 1 distancing rules.

Health authorities plan to finalize the new social distancing scheme by the end of the month.

The country has been using a five-tier social distancing system since November. Previously, it implemented a three-level system.

The greater Seoul area, home to about half of the nation’s 52 million population, is currently under Level 2, the third highest in its five-tier system, and other regions are placed under Level 1.5.

Of the 381 locally transmitted cases announced early Friday, 129 additional cases were reported in Seoul and 168 in Gyeonggi Province that surrounds the capital. Incheon, 40 kilometers west of Seoul, identified 12 new cases.

Among virus clusters, a restaurant in southwest Seoul added three more cases, raising the total to 37. Cluster infections involving foreign workers in Dongducheon, just north of Seoul, increased by 11 to 114.

Cluster infections involving foreign workers in Dongducheon, just north of Seoul, increased by 11 to 114. The number increased to 146 late Friday.

There were an additional 17 imported cases, down six from a day earlier, increasing the total caseload to 7,146. Of the new imported cases, six were from the United States followed by the Philippines with four.

The number of seriously or critically ill COVID-19 patients was 135, down five from the previous day.

The total number of people released from quarantine after making full recoveries was 82,560, up 398 from a day earlier, with 7,451 people being isolated for COVID-19 treatment, down eight from a day ago.