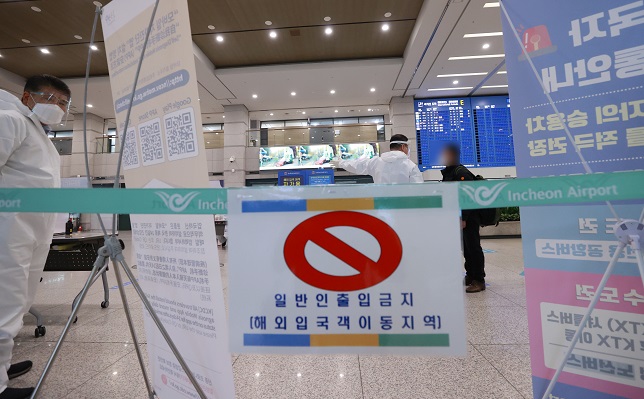 Quarantine officials guide incoming passengers at the No. 1 Terminal of Incheon International Airport, west of Seoul, on Feb. 4, 2021. (Yonhap)

SEOUL, Feb. 4 (Korea Bizwire) — South Korea’s daily new coronavirus cases stayed above 400 for a second straight day on Thursday as cluster infections continue to pop up across the country despite extended virus curbs.

The country added 451 more COVID-19 cases, including 429 local infections, raising the total caseload to 79,762, according to the Korea Disease Control and Prevention Agency (KDCA).

The daily caseload bounced back to over 400 on Wednesday after staying under 400 the three previous days.

As of 9 p.m. Thursday, the country added 339 more cases, down 76 from the same time Wednesday, according to the health authorities and local governments. New cases are counted until midnight each day and announced the next morning.

New virus infections had been slowing down since the third wave of the pandemic peaked at a record high of 1,241 on Dec. 25.

Group infections have been reported from private gatherings and various facilities as well.

Amid a flare-up in virus cases, the KDCA on Sunday extended Level 2.5 social distancing rules, the second highest in a five-tier scheme, in the greater Seoul area and Level 2 measures in other regions for two weeks to come.

Under the extended rules, gatherings of five or more people are also banned across almost the entire country.

Cases tied to IM education facilities stood at 389, unchanged from the previous day. Infections traced to a welfare facility in central Seoul rose five to 76, and cases involving a general hospital in eastern Seoul jumped 11 to 69.

Virus patients linked to a church in Seocheon, 235 kilometers southwest of Seoul, rose 10 to 42.

The KDCA said Wednesday it may consider easing social distancing rules before the Lunar New Year holiday that starts late next week if the number of daily infections falls sharply.

But authorities remain cautious, saying relaxing the curbs runs the risk of an uptick as cluster infections have continued to pop up at religious facilities, hospitals and other risk-prone establishments.

The KDCA said it acknowledges the possibility of a fourth wave of the coronavirus pandemic in March in the face of an increase in the number of the virus variant cases.

In a briefing, the KDCA said it plans to announce stricter quarantine measures soon to prevent the mutant virus from entering the country.

The health agency said the percentage of people testing positive for new coronavirus antibodies was 0.31 percent, far lower than 10 percent in overseas countries.

In antibody tests on 17,890 local citizens and military recruits, the agency found only 55 of them had new coronavirus antibodies. 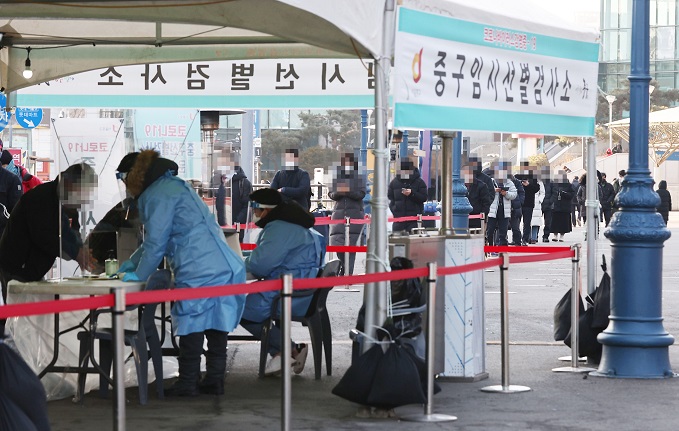 People line up to take a coronavirus test at a clinical center set up in front of Seoul Station in central Seoul on Feb. 3, 2021. (Yonhap)

Of the 429 new local infections announced early Thursday, 166 cases were reported in Seoul and 128 cases in Gyeonggi Province that surrounds the capital. Incheon, 40 kilometers west of Seoul, reported 43 more cases.

The country added 22 imported cases, increasing the total to 6,425. Twelve cases came from the United States, followed by six cases from Asian countries except for China, three from Europe and one from Africa.

Seven more deaths were reported, raising the total to 1,448. The fatality rate was 1.82 percent.

The number of seriously or critically ill COVID-19 patients reached 211, down from 220 a day earlier.

The total number of people released from quarantine after making full recoveries stood at 69,704, up 405 from the previous day.

Authorities on Wednesday warned against any meetings with people who have returned home from overseas countries in order to stem the spread of the coronavirus variant inside the local communities.

The KDCA said it identified five more cases of contagious variants of COVID-19, which were domestically transmitted, sparking concerns over the spread of the more transmissible virus.

Four people were confirmed to have been infected with the variant from Britain and one tested positive for the South African variant, raising the total caseload to 39.

South Korea has extended the ban on passenger flights arriving from Britain, which has been in place since Dec. 23, until next Thursday to block the new virus variant.

With the country’s vaccination program set to begin this month, some 1,900 Koreans working for the U.S. forces in Korea have received coronavirus vaccines since late last year along with U.S. soldiers.