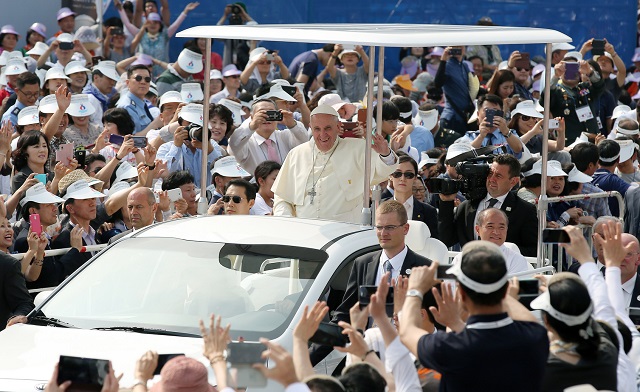 The pontiff brought with him more than 100,000 foreign visitors and every ceremony he leads attracts hundreds of thousands of the faithful. (image: Republic of Korea/flickr)

SEOUL, Aug. 17 (Korea Bizwire) — The visit of Pope Francis is welcomed by Korea’s hospitality operators and restaurant owners as a bellwether of economic recovery. The pontiff brought with him more than 100,000 foreign visitors and every ceremony he leads attracts hundreds of thousands of the faithful.

The biggest beneficiaries of the pope’s visit were hotels located in downtown Seoul. On the night of August 15, the hotels near Gwanghwamun were fully booked with visitors to the following day’s ceremony to beatify 124 Korean martyrs killed during the 18th century and the early 19th century.

The 410 guestrooms at the Plaza Hotel Seoul were sold out weeks ago as it would be the home to His Holiness and his delegation and the press. The hotel’s suites on the front side of the building between 6th and 19th floor were sold out earlier than any other rooms even though the room cost 600,000 won (US$588) a night. That’s because the suites provide the best spot to view the beatification ceremony. Other hotels such as Lotte and the Westin Chosun reported their reservation rates were in excess of 95 percent.

The charter bus industry, which had suffered a setback since the April 16 ferry incident due to a moratorium on school trips and a reduced number of tourists, is now busy with a flood of new orders. A charter bus driver said, “For the next three days I am fully booked to take Catholic visitors in Daejeon and Gwangju to Gwanghwamun Square and Solmoe Holy Ground in Dangjin.”

An official with Asiana Airlines said, “For three days during the pope’s visit, the reservation rate for domestic lines has increased by about 10 percent from a year ago.” In anticipation of an increase in passengers to participate in the beatification ceremony, Korea Railroad Corporation, or Korail for short, has added six more trains on the 16th.

Other merchants near the beatification venue are also excited about the prospect of raking in money. The convenience stores near Gwanghwamun have added more employees and stocked up with bottled water, gimbab (white rice rolled in dried seaweed), and disposable ponchos.

A restaurant owner nearby said, “Although not appropriate to talk about money in relation to the pope, I am quite happy to see more customers come in thanks to him. We prepared twice more food than normal for lunch customers on the 16th.”

The hotels and restaurants near Kkottongnae, or flower village, in Eumseong and Haemi Castle in Seosan to which the pope visited expect more tourists to come even after his departure. The special commemorative stamps for papal visit, worth 550 million won, were almost sold out.