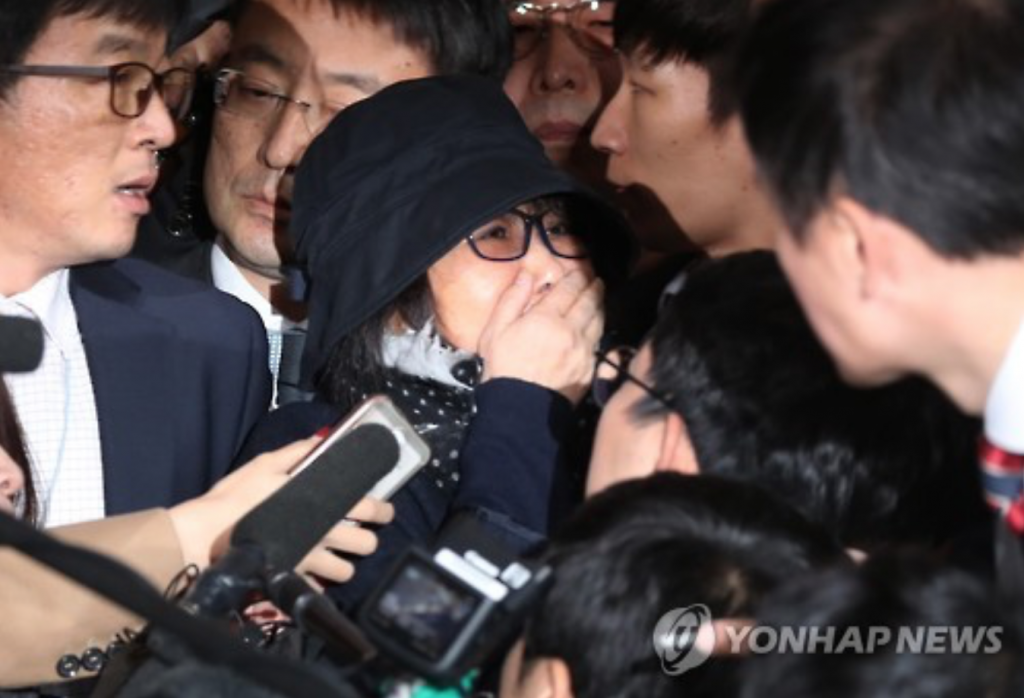 Choi Soon-sil, the woman at the center of South Korea’s political scandal, is surrounded by reporters as she enters the Seoul Central District Prosecutors’ Office for questioning on Oct. 31, 2016. (image: Yonhap)

SEOUL, Nov. 1 (Korea Bizwire) – Prosecutors on Monday placed Choi Soon-sil, a confidante of President Park Geun-hye, under emergency detention after grilling her for hours on allegations of interfering in state affairs and peddling influence.

Seoul Central District Prosecutors’ Office has 48 hours in which to decide whether it will seek a warrant to formally arrest the 60-year-old, who appeared for questioning earlier Monday. She’d returned from Europe on Sunday after nearly two months.

“Choi has denied all of the charges against her, and we’re concerned that she may destroy evidence,” a prosecution official said. “She has fled overseas in the past, and she doesn’t have a permanent address in Korea, making her a flight risk. She is also in an extremely unstable psychological state, and it’s possible an unexpected event could occur if she is released.”

Choi appeared at the prosecutors’ office around 3 p.m. Monday.

“I am so sorry,” she told reporters before entering the office. “I have committed a deadly sin. Please forgive me.”

Her lawyer Lee Kyung-jae later said she was trying to express her feelings, adding her statements cannot be deemed as holding any legal meaning.

“She deeply regrets the fact that she caused such a huge commotion,” he told reporters in front of the Seoul High Prosecutors’ Office. “She thinks she should receive due punishment if there was any (violation of law).”

As she got out of a black sedan in black clothes, covering her face with a black hat and a scarf, some hundreds of reporters who had been waiting since early morning surrounded her. It was the first time she appeared in public after the scandal surfaced.

Some citizens engaged in surprise protests as she showed up, chanting and picketing “Down with Park Geun-hye!” and “Arrest Choi Soon-sil!”

The prosecution immediately released a statement, expressing regret over the chaos that occurred.

The woman, who holds no governmental post, has been accused of influencing state affairs via her decades-old friendship with the president. Choi is also suspected of siphoning off funds from two nonprofit organizations that received some tens of billions of won in donations from local companies in the name of supporting various cultural and sports projects.

The scandal has been snowballing as the president on Tuesday apologized in a nationally televised address over part of the allegations raised against her and the confidante, admitting to asking for Choi’s feedback on dozens of presidential speeches before they were made public.

Many called for Choi to be arrested upon arrival.

Her attorney Lee said he had asked the investigators to delay the questioning for a day to give her time to rest, as she is not in good health due to pre-existing medical conditions and the long journey. She is currently taking pills for panic disorder, according to Lee.

Choi is a daughter of Park’s late mentor Choi Tae-min, a leader of a questionable religious group who died in 1994. Park is known to have developed a friendship with the Choi family after her mother and then-first lady Yook Young-soo was assassinated in 1974.

Faced with growing calls from the public to take responsibility for the scandal, Park carried out a partial reshuffle of her secretariat Sunday. The chief executive will soon fill in other vacant positions, according to presidential spokesman Jung Youn-kuk.

The latest scandal has sent Park’s approval rating to the 10 percent range, the lowest point seen during her presidency that began February 2013, according to local pollster Gallup Korea.

On Saturday, thousands of protesters took to the streets of downtown Seoul to demand her resignation.