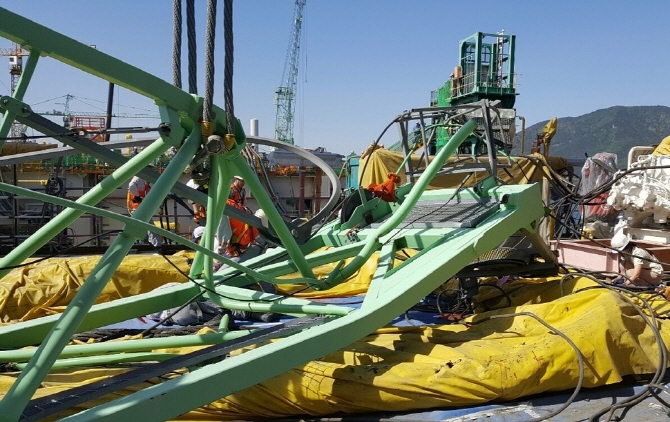 On May 1, 2017, two cranes collided at the shipyard in the southeastern port city of Geoje, causing a structure to fall from one of the cranes. Six workers at the site were killed and another 25 were injured. (image: Gyeongsangnam-do Fire Department)

SEOUL, Sept. 7 (Korea Bizwire) — The causes of large-scale industrial accidents at South Korean shipyards lie in the multi-layer subcontract practice prevalent in the industry, says an investigation committee launched by Ministry of Employment and Labor (MOEL).

The committee was formed in response to major accidents in the shipbuilding industry in 2017, including a crane collapse at Samsung Heavy Industries’ shipyard and an explosion during painting work at STX Offshore and Shipbuilding.

Sixteen members of the committee, including civilian experts, conducted a six-month investigation.

“Strictly limiting multi-layer subcontracting is the first thing to do to prevent serious accidents in the industry,” said the committee in a report submitted to the MOEL on Thursday.

There were 326 deaths reported in the 10 years between 2007 and September 2017 due to industrial accidents, of which 257, or 79.3 percent, were subcontracted workers. Only 66 were regular workers from the contractor.

A total of 16,343 industrial accidents took place during the same period.

The committee noted that the multi-layer subcontracting complicates the accountability issue, making it hard to decide which party is responsible for safety measures and training.

This results in a low level of safety training for workers.

“Subcontracting itself is inevitable,” commented the committee. “But it shouldn’t be used just because it’s cost effective.”

Some of the proposals made by the committee included doubling the obligation of contractors for safety supervision and accountability, supporting subcontractors and their workers to be more safety and hygiene savvy, and enforcing safety-friendly subcontracts.

Similar measures need to be taken in other industries such as construction, the committee added, because shipbuilding is not the only field where industrial accidents are common.