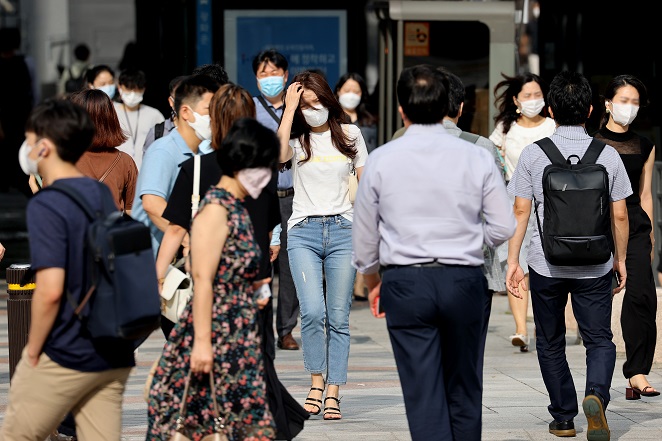 While many people are struggling with the inconvenience and restrictions that the pandemic era has created, some people point out that they don’t have to care about their looks since they spend most of their day at work covering up their faces.

Female office workers, in particular, claim that they have escaped the need to worry about makeup.

“Ever since the outbreak, we spend most of the day with masks on, so I go to work these days without makeup,” said a 27-year old female office worker in Seoul. “It doesn’t take me as long to get ready in the morning, and I’m spending less on cosmetics.”

“I used to put on basic makeup purely out of a sense of duty. Now, I only put on sunscreen or lip balm,” said another 26-year old office worker. “I feel so much better now that I don’t have to ‘look nice’ just because of social decorum.”

Some people are choosing to put makeup only on areas not covered by a mask.

The cosmetics market is bearing the brunt of this shift in demand. Amorepacific Corp. and Aekyung Industrial Co.’s operating profits in the third quarter halved compared to the same period last year.

While there has been constant demand for sunscreen and other essential cosmetics products, color cosmetic sales have plunged.

Experts argue that this proves that women have been succumbing to social pressure that forced to put on makeup all these years.

“Putting on makeup as ‘a voluntary act to look pretty’ is now a lie,” said Bae Jin-kyung, head of the Korea Women Workers Association.

“You should be able to stay away from it if you can. Rejecting makeup is an act of social awakening,” Bae added. “It’s part of the Escape the Corset movement in which women are throwing away repression and gaining independence.”