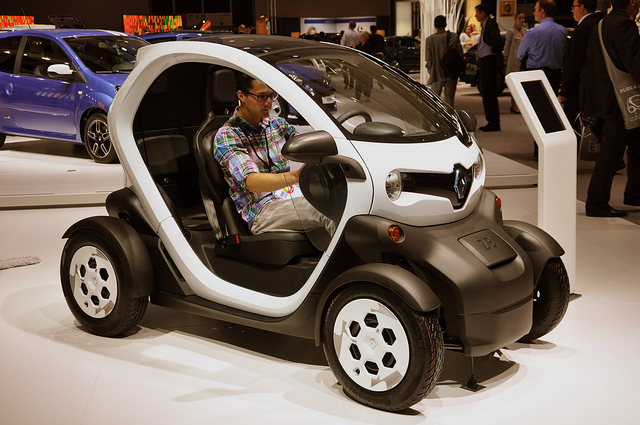 With the revision, the ministry defines ultra-compact vehicles as “automobiles suitable for transporting less than two passengers” and plans to permit a trial run for the Twizy to see if it is suitable for use on Korean streets. (image: GriinBlog/flickr)

SEOUL, Aug. 13 (Korea Bizwire) – As early as January of next year, Renault-Samsung’s Twizy, an ultra-compact battery-powered vehicle, will explore Korean streets through a trial project. Currently, use of the vehicle is banned even for testing, due to a lack of related regulations.

The Ministry of Land, Infrastructure and Transport announced that it would revise the enforcement decree for the Automobile Management Act to introduce regulations permitting road tests for ultra-compact vehicles and autonomous vehicles.

The current law identifies five types of vehicles, including two-wheeled vehicles, sedans, vans, trucks and special vehicles. However, for the Twizy, the current law could not determine which type is suitable.

In May, the transport ministry canceled a temporary service permit for Twizy models that were destined to be used for chicken delivery by Songpa District in Seoul.

With the revision, the ministry defines ultra-compact vehicles as “automobiles suitable for transporting less than two passengers” and plans to permit a trial run for the Twizy to see if it is suitable for use on Korean streets.

Local government bodies can select test routes by themselves, but motorways and tollways will be excluded for safety reasons. The maximum speed of the test vehicles will be limited to 60km/h.

Meanwhile, the ministry will introduce standards for the temporary trial of autonomous vehicles.

The ministry plans to introduce autonomous vehicles at the 2018 Pyeongchang Winter Olympic Games and commercialize them by 2020.