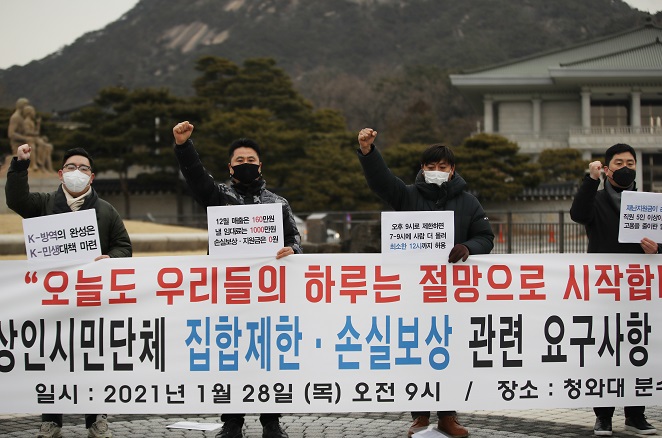 Leaders of small business groups hold a press conference outside Cheong Wa Dae in Seoul on Jan. 28, 2021, demanding the easing of social distancing restrictions and compensation for their losses. (Yonhap)

SEOUL, Jan. 28 (Korea Bizwire) — Owners of restaurants, internet cafes and other small businesses called on the government Thursday to extend their opening hours and compensate their losses amid ongoing restrictions caused by the coronavirus pandemic.

At a press conference outside the presidential office Cheong Wa Dae, leaders of small business groups said the government’s social distancing rules have pushed many shops to the brink of closure, as most are required to close at 9 p.m. and bars and nightclubs are subject to an assembly ban.

“The pandemic has continued for at least a year, and (the government) should have found ways to let us safely reopen in that time,” Kim Ki-hong, a leader of an association of internet cafe owners, said.

Many shopkeepers have complained that the restrictions are applied unfairly, allowing some businesses, such as indoor gyms, to reopen, while keeping other seemingly similar facilities shut.

“I expect the government to have accumulated a lot of know-how while implementing the antivirus measures,” Jeong In-seong, an executive of a billiard halls association, said.

“It’s time for a more scientific and data-based approach to social distancing that is tailored for each industry type.” 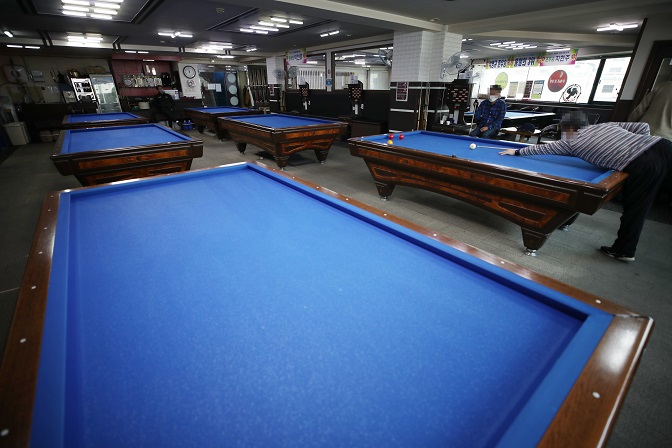 They demanded the government extend their business hours until midnight and come up with a compensation plan that includes retroactive payments for losses incurred last year, full compensation for total damages and burden sharing with the government, landlords and the financial sector.

In addition, they called for the creation of a consultative body involving the government, the National Assembly and the private sector.

After the press conference, they delivered a letter addressed to President Moon Jae-in to Cheong Wa Dae.

Owners of bars and nightclubs held a separate press conference outside City Hall to demand an end to the assembly ban.

“Four people in the business have committed suicide since the start of the pandemic,” Kim Ki-jun, who runs a nightclub in eastern Seoul, claimed.

“We ask the government and the Seoul metropolitan government to quickly let us reopen and provide compensation for our accumulated losses.”