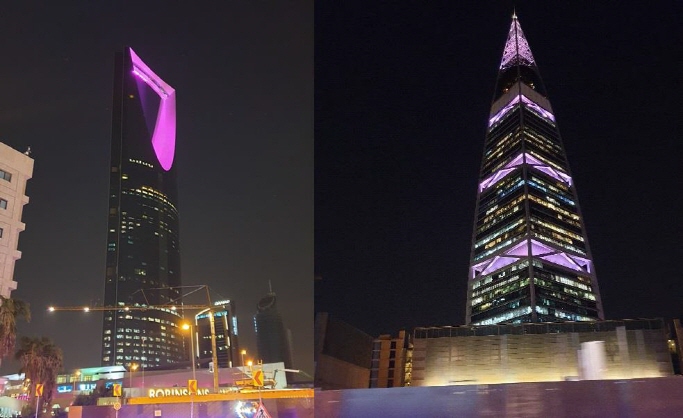 The septet arrived in Riyadh early Thursday for their historic “Love Yourself: Speak Yourself” concert in the Middle Eastern city’s King Fahd International Stadium, set for Friday evening.

One day before the first-ever stadium concert by non-Arab artists in Saudi Arabia, major skyscrapers in the capital were illuminated in BTS’ signature color, purple, including Al Faisaliyah Center, Kingdom Center and the Olaya Towers.

Riyadh was abuzz with excitement as the seven BTS members touched down in the city, with 100 abaya-clad Saudi Arabian fans having come out to the airport to greet the band.

Unlike previous BTS concerts in Western and Asian cities, the Saudi Arabian concert has not seen its fans, known as ARMY, pitch tents and camp out before the event.

Still, the rare Saudi Arabian concert brought in fans from other Middle Eastern countries such as Kuwait and the United Arab Emirates. 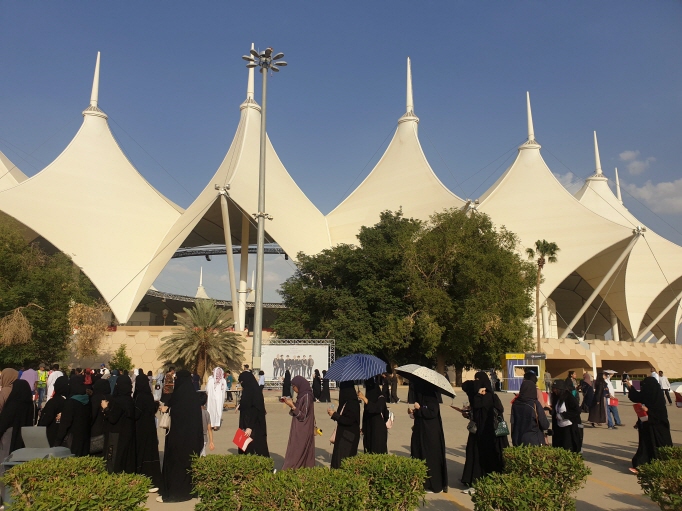 Saudi Arabian fans line up to buy BTS merchandise at booths set up around King Fahd International Stadium in Riyadh, on Oct. 10, 2019. (Yonhap)

Many fans, mostly in their teens and 20s, stayed late at night near BTS’ rehearsal venue, calling out the names of the BTS members in unison and holding up Army Bomb light sticks.

Fans also lingered till late around a hotel in the capital where BTS was reportedly staying.

“After knowing BTS, I developed a completely different dream and life,” said 19-year-old Saudi Arabian college student Hayfa, who was among the throng near the stadium’s merchandise sales booths late Thursday.

“I became more open-minded as well after I developed and solidified relationship with people from other countries (through BTS),” she noted.

High-school girl Janna took a three-hour car ride to come to the venue. “I learned to respect and love myself through BTS music,” she said.

The Friday show will be closely watched by fans around the world as it marks BTS’ return to stage following their five-week break in August and September.

The event will be live streamed via No. 1 South Korean internet portal Naver’s V Live Plus.

It is the last foreign leg of the BTS world tour, which will wrap up in Seoul with performances set for Oct. 26, 27 and 29. Some 30,000 fans will be allowed in to watch the Saudi Arabian leg of the world tour on Friday.

Saudi Arabian fans will be enjoying the same concert repertoire as previous BTS “Love Yourself: Speak Yourself” concerts, but BTS’ management agency, Big Hit Entertainment, has revised part of the choreography out of respect for local Islam culture.

“In consideration of local sentiment, some dance moves that involve revealing a member’s abdominal muscles will be modified,” a Big Hit official said.

“Our tour, which kicked off in August last year in Seoul, is drawing to its final stage. … We are very excited to meet with fans tomorrow. We will do our best to present a top-class performance,” BTS was quoted as saying.