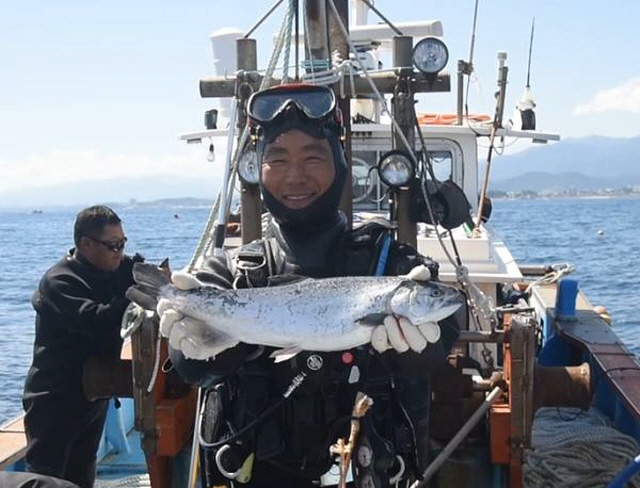 Donghae STF Co., a local aquaculture firm, has been raising some 10,000 silver salmon at a special enclosure some 5 kilometers off the country’s eastern coast since late last year. (image: Min. of Oceans & Fisheries)

SEJONG, Oct. 26 (Korea Bizwire) — South Korea has become the first Asian country to successfully farm salmon throughout the year, which can help the country reduce imports and lead to exports down the road, the government said Monday.

According to the Ministry of Oceans and Fisheries, Donghae STF Co., a local aquaculture firm, has been raising some 10,000 silver salmon at a special enclosure some 5 kilometers off the country’s eastern coast since late last year.

The enclosure system that has been patented can be moved up and down in the water so the fish can be raised at the ideal water temperature of 15 degrees Celsius.

“Asian countries have not been able to raise salmon at fish farms because water temperatures rise too high for salmon farming during the summer months,” the ministry said.

Initial pilot shipments of fish from the farm that can help gauge market reaction will take place next month with full fledged sales to start in November 2016, the ministry said.

Oh Woon-yul, general director of fisheries infrastructure at the ministry, said once full-scale production begins the country will be able to replace some of its imports with those raised at local fish farms.

Last year, South Korea imported some 22,810 tons of salmon from countries such as Norway and the United States. It caught some 437 tons in coastal waters.

“With the success of salmon fish farming, upwards to 800 tons of high quality fish that will be fresher, taste better and be 20-30 percent cheaper than imports can reach the market,” the official claimed.

The ministry also said that with global demand for salmon on the rise, local fish farms should be able to find export markets down the road, especially in Northeast Asia.

The global market reached 4.24 million tons as of 2013. Of all salmon sold, 3.12 million tons came from aqua farms in countries like Norway, Chile and Denmark with the rest being caught in the wild. Besides South Korea six countries have succeeded in fish farming salmon so far.

The Japanese market alone stands at 600,000 tons per year with the country importing half of its fish from abroad. In China, the market stands at around 300,000 tons, but growing rapidly with all salmon being imported from abroad.