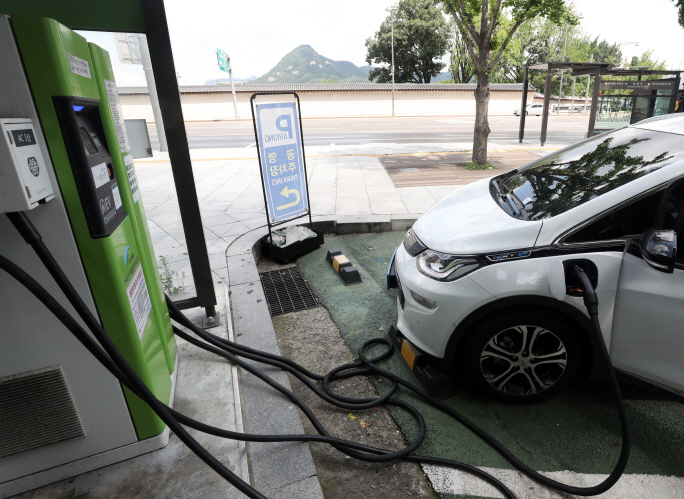 An electric car is being charged at a power station in central Seoul on Aug. 2, 2019. (Yonhap)

SEJONG, Jan. 20 (Korea Bizwire) — South Korea’s finance and environment ministries said Monday that they have changed a state subsidy scheme for eco-friendly vehicles to allow buyers of efficient cars to get larger subsidies from this year.

Currently, the state subsidy is calculated on an electric car’s battery capability.

Under the revised subsidy program, buyers of an electric vehicle with a longer driving range per charge will get more in subsidies, the finance ministry said in a statement.

Effective from this year, the one-time purchase subsidy for an electric vehicle will be increased to as much as 18.2 million won (US$15,712), according to the statement.

For a hydrogen-powered vehicle, the state subsidy rises to as much as 42.5 million won, it said.

A total of 94,000 electric and hydrogen-powered vehicles are expected to benefit from the state subsidy this year, according to the ministry.

South Korea has promoted the use of hydrogen for power generation, vehicles and other industries.

The accumulated sales of hydrogen fuel cell cars here hovered above 5,000 units in 2019, compared to around 900 units from a year earlier, according to government data.

Under the initiative, South Korea has spent some 370 billion won to promote sales of hydrogen cars and develop related technologies.