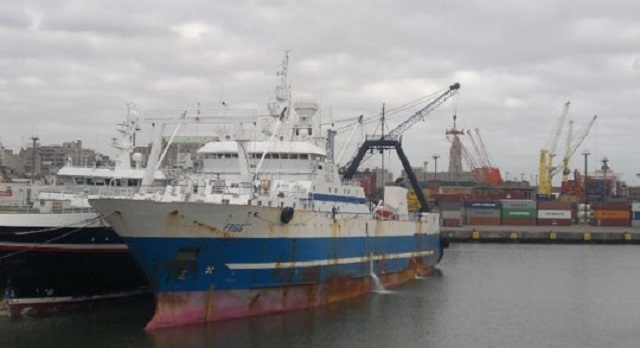 A Russia-flagged ship which reported 32 virus cases is docked at a port in South Korea’s southern city of Busan on July 23, 2020, in this contributed photo. (Yonhap)

At least 32 sailors on a Russia-flagged fishing vessel docked in the southeastern city of Busan tested positive for the new coronavirus earlier in the day, according to the Korea Centers for Disease Control and Prevention (KCDC).

Of 94 crewmembers aboard the 7,733-ton ship that entered a Busan port on July 8, 62 sailors tested negative for COVID-19.

“The government will consider designating Russia as a country subject to stricter quarantine steps,” Yoon Tae-ho, a senior health official, told in a press briefing.

The government has placed six countries — Bangladesh, Pakistan, Kazakhstan, Kyrgyzstan, the Philippines and Uzbekistan — on the list of such high-risk countries in an effort to contain imported cases.

Arrivals from the countries are required to submit a certificate showing they tested negative for the new coronavirus. 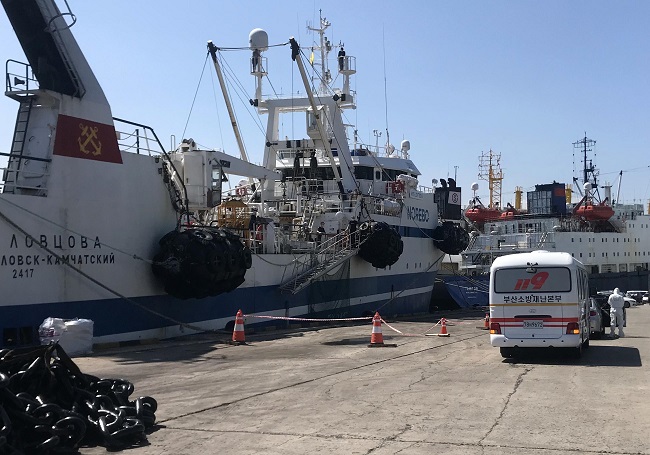 This photo, provided by fire service authorities in the southeastern port city of Busan on July 17, 2020, shows firefighters transferring Russian sailors infected with COVID-19 to a hospital for treatment.

The latest cluster infections tied to the Russian vessel came to light after a South Korean ship repairman, who had boarded the ship repeatedly for repair work, tested positive for the virus Thursday.

Health officials doubted that the person contracted the virus from the infected Russian sailors.

The KCDC said five more cases tied to the repairman were reported as it has been conducting COVID-19 tests on some 150 people who have contacted the worker.

Early this month, authorities carried out on-board quarantine checks of the ship, but there were reportedly no sailors showing virus symptoms at that time.

The KCDC said it is conducting virus tests on 429 crewmembers aboard 13 Russian vessels that have been docked in Busan ports after making arrivals here since July 1.

“Health authorities see a very high possibility that more Russian sailors who are asymptomatic or show mild symptoms will be reported,” KCDC Deputy Director Kwon Joon-wook said in a briefing.

The number of new daily virus cases identified Friday in South Korea will surpass 100 due to infections tied to the Russian sailors and workers flown from virus-hit Iraq, health authorities warned.