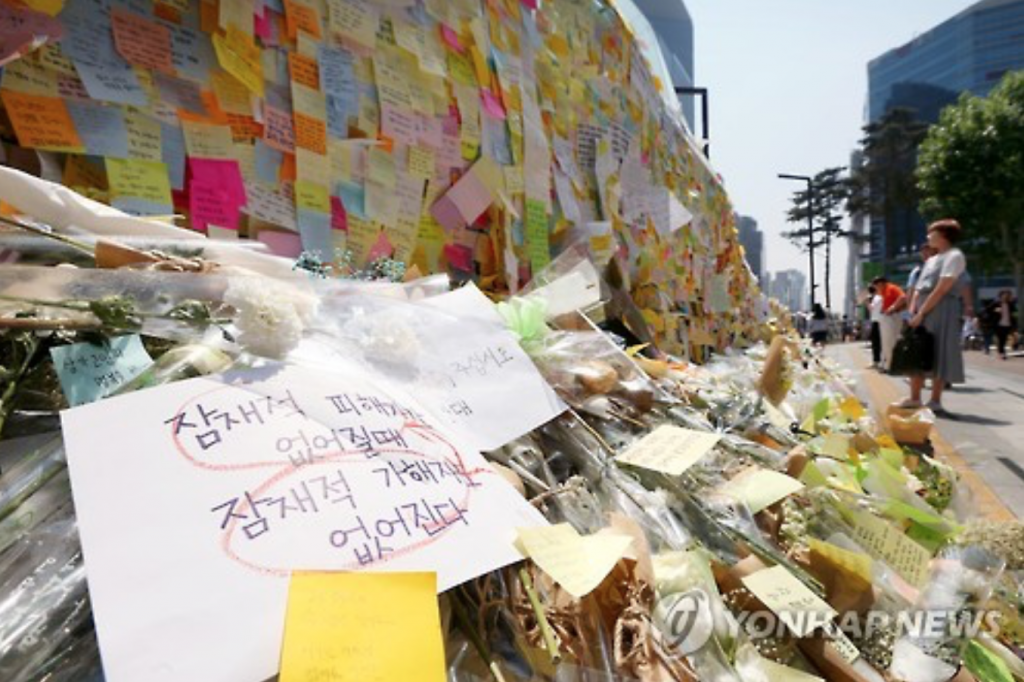 Letters of condolences for the victim who was murdered by a stranger in the popular Seoul district of Gangnam on the gate of Gangnam Station. (image: Yonhap)

SEOUL, June 22 (Korea Bizwire) – South Korea on Wednesday unveiled a series of measures aimed at creating a more equal society for women, about a month after a woman was killed by a stranger in a high-traffic neighborhood in Seoul.

The murder sent a shockwave through a nation that has made strides in recent years but apparently leaves much to be desired in areas of gender equality.

The measures announced Wednesday focus on preventing hate crimes against women, better protecting victims of such crimes and raising awareness for gender equality in the country, the Ministry of Gender Equality and Family said. It held ministerial-level talks with the Ministry of Education and the National Police Agency.

The measures are a follow-up to the first batch announced earlier this month when South Korea decided to seek the maximum default sentence for hate crimes against women and actively appeal sentences that fall short.

These measures all come on the heels of a high-profile murder case in which a woman in her 20s was stabbed to death by a stranger at a bar bathroom in the popular night-life district of Gangnam on May 17. The suspect said he killed her because women had ignored him, triggering a national debate on women’s status in a country that ranks 115th out of 145 countries in terms of gender equality, according to the World Economic Forum last year.

In a press briefing Wednesday, the gender ministry said it will expand the hotline currently in service for female victims by hiring more counselors and setting up 24-hour online chatrooms by November.

It will also implement preventative workshops in areas that have the highest crime rates and customize other preventative measures in neighborhoods with the highest density of single-woman households.

A protocol for responding to sex crimes will be distributed to schools and public organizations, and more universities will be encouraged to set up counseling services for victims of sexual violence.

Broadcasting authorities will be asked to add gender equality as a factor to consider when censoring TV and media content, and a council comprised of government officials, civic activists and researchers will be established to publish annual reports on media coverage of gender issues.

The ministry said it will ask teachers colleges as well as primary and secondary schools to expand education on gender equality. It will also hold educational workshops for parents, civil servants and journalists to a similar end.