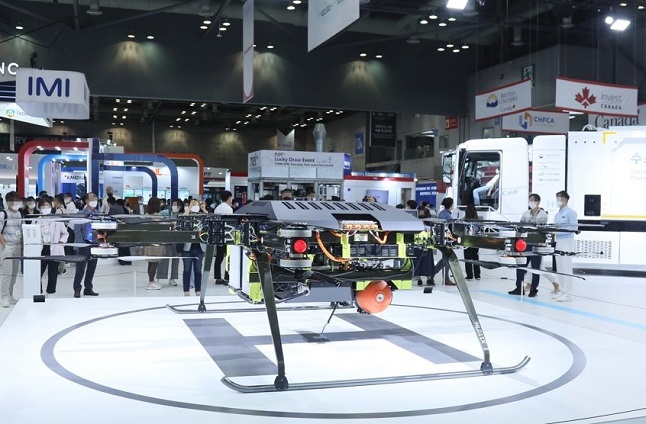 SEOUL, Nov. 9 (Korea Bizwire) — South Korea vowed Wednesday to significantly boost the use and production of clean hydrogen by extending support for securing advanced technologies and building infrastructures with a goal to achieve zero-emission goals and become the world’s No. 1 hydrogen industry powerhouse.

The government announced the comprehensive roadmap during a hydrogen economy commission meeting in Seoul presided over by Prime Minister Han Duck-soo.

Under the blueprint, the government will push to boost the number of hydrogen-powered commercial vehicles in the country to 30,000 by 2030 from the current 211 units, and build 70 liquid hydrogen fueling stations across the country, according to the Ministry of Trade, Industry and Energy.

Buyers of hydrogen buses and trucks will be eligible to more subsidies, and the government will change police buses and other vehicles for public use into hydrogen-powered ones.

It also seeks to raise the ratio of blue and green hydrogen out of the total power output to 2.1 percent in 2030 and further to 7.1 percent by 2036.

Currently, the ratio is zero, and the country mostly depends on fossil fuel-based grey hydrogen in terms of hydrogen production.

The measures are expected to reduce around 28 million tons of greenhouse gases, create 98,000 jobs and generate economic impact worth 47.1 trillion won by 2030, the ministry said.

The government also vowed efforts to secure key advanced technologies in fuel cell, hydrogen turbine and other major fields of the sector and to nurture 600 hydrogen-specialized firms by 2030.

The plans would help the country achieve the technology level in the field comparable to that in major countries by the time, according to the ministry.

“We will further boost demand for hydrogen, particularly in production and mobility fields, and to take the lead in the establishment of global hydrogen supply chains. We will also set up major production facilities and related infrastructures not only at home but also in foreign nations,” the ministry said in a release.