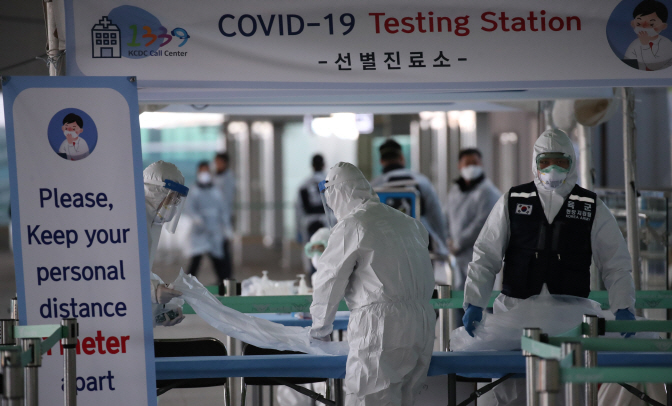 SEOUL, March 29 (Korea Bizwire) — South Korea will enforce a two-week mandatory quarantine to cover all entrants from overseas over the new coronavirus starting April in a drastic measure to curb a steady rise in imported cases, officials said Sunday.

The country reported 105 new cases of COVID-19, bringing the nation’s total to 9,583, according to the Korea Centers for Disease Control and Prevention (KCDC). The death toll rose by eight to 152, it said.

The 105 new cases, which were detected Saturday, represented a fall from 146 infections a day earlier, the KCDC said.

The number of new infections has been around 100 for more than two weeks, but imported cases are on a steady rise, complicating authorities’ quarantine efforts.

Of the new cases, 41 involved entrants from overseas — 23 from Europe, 14 from the Americas and four from unidentified Asian countries. Of the total infections, imported cases reached 412, accounting for 4.3 percent.

Under the new measure, all arrivals to the country regardless of nationality should stay in isolation for 14 days starting Wednesday. Visitors without local addresses here should stay in government-designated facilities at their own expense.

South Korea is currently enforcing both a two-week quarantine period and virus tests for all long-term arrivals from Europe, regardless of symptoms. Entrants from the U.S. have also been required to self-isolate at home for two weeks.

The government will also impose a two-week quarantine on all foreigners coming for short stays to effectively prevent entry for unimportant purposes, such as tourism.

Exceptions will be applied to those who have specific visas such as diplomatic or public affairs visas.

The government rejected calls to impose an entry ban on foreigners, citing the need for South Koreans to go abroad for essential business purposes.

“From the perspective of public and national interests, the government thinks that entry restriction measures are more rational than entry bans,” Health Minister Park Neunghoo told a press briefing. 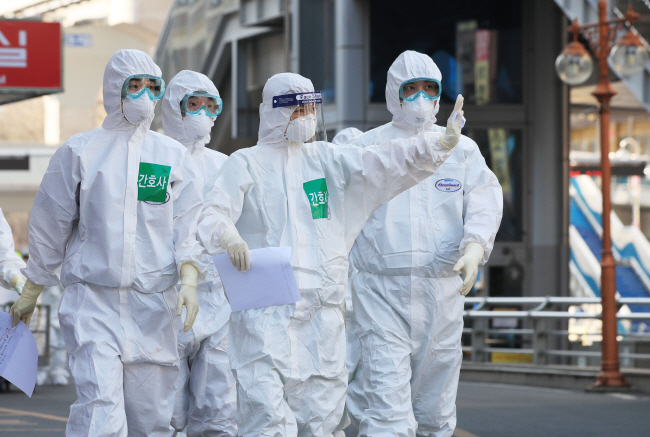 Medical staffers wave to reporters while entering Dongsan Hospital in the virus-hit city of Daegu for a work shift on March 24, 2020. (Yonhap)

South Korea has strengthened social distancing through April 5 to contain the spread of the virus that emerged in China late last year.

Citizens are strongly urged to stay home, except for essential needs or jobs.

The government has restricted religious gatherings, indoor sports activities and visits to nightclubs and other entertainment venues in a bid to stem small-scale cluster infections.

The government said it is preparing “everyday life quarantine” guidelines for people to carry out quarantine steps as part of their routines as authorities brace for a prolonged pandemic.

The guidelines are aimed at carrying out quarantines in such a way that social and economic activities can continue.

The outbreak is expected to deal a serious blow to the South Korean economy as people refrain from outdoor activities to maintain social distancing.

“When to move to the everyday life quarantine scheme will be decided after comprehensively considering factors like the opening of the new school year and virus cases,” Minister Park said.

South Korea has pushed back the new school year until April 6, five weeks later than in normal years. But many teachers and parents are opposed to starting the spring semester next week over infection concerns.

Cluster infections at churches and nursing homes have continued.

The KCDC said six more members of Manmin Central Church in Seoul were infected with the coronavirus, bringing the total number of COVID-19 patients at the church to 13.

The agency said the number of full recoveries rose more than twice as fast as new infections. An additional 222 patients have been released after recovering fully, bringing the total number of cured people to 5,033.