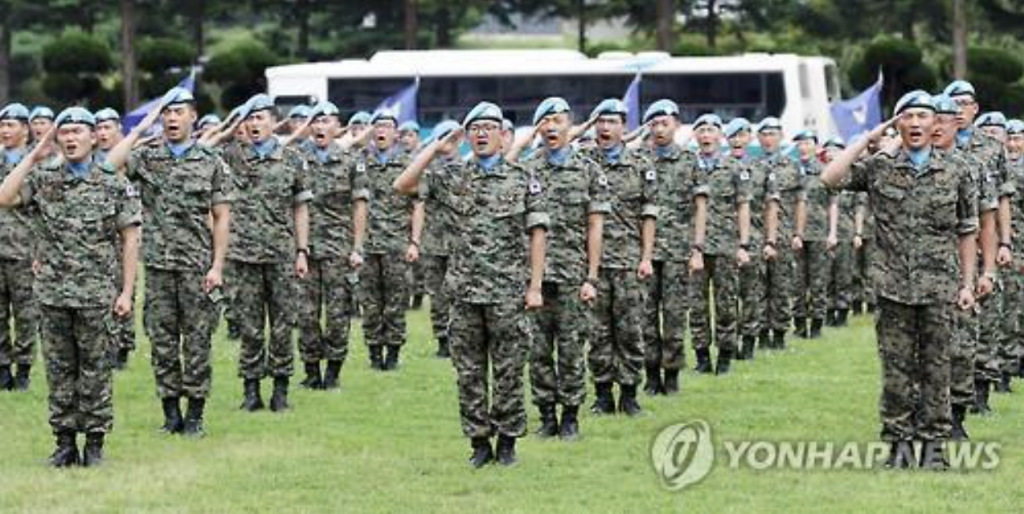 Taken on July 26, a new team of soldiers who will replace their colleagues in the Dongmyung Unit in Lebanon salute in an event held in Incheon, 40 km west of Seoul. (image: Yonhap)

In a telephone survey conducted from July 21-24, 74 percent of 1,000 respondents supported South Korean soldiers’ missions to help restoration and peacekeeping operations in war-torn or conflict-prone areas, the Ministry of National Defense said in a press release.

“The biggest merit for military dispatches lay in South Korea contributing to the international community in handling emergencies,” a ministry official said, citing the results. On the negative side people voiced concerns about safety issues confronting dispatched soldiers in politically and socially unstable environments.

At present, there are four South Korean military units operating overseas — the Hanbit Unit in South Sudan, the Dongmyung Unit in Lebanon, the Akh Unit in the UAE and the Cheonghae Unit in Oman — for peacekeeping, restoration, anti-pirate and training missions.

Of the units operating abroad the Dongmyung (East Light) Unit made up of some 800 troops has been engaged in peacekeeping operations in Lebanon since July 2007. The 130-strong Akh (Brothers) Unit has been dispatched to the UAE to help train the country’s special forces and protect South Korean residents there since January 2011.