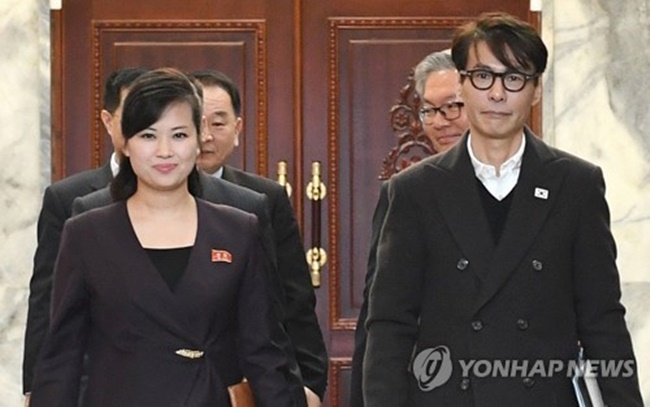 The South’s art group will visit the North’s capital from March 31 to April 3 for two performances, according to a joint statement adopted after inter-Korean talks at the border truce village of Panmunjom.

South Korea agreed to send an art troupe and a taekwondo demonstration team to Pyongyang when South Korean special envoys met with North Korean leader Kim Jong-un in early March. The concert comes ahead of an inter-Korean summit slated for late April at the border village.

The South will send an advance team to check venues from Thursday to Saturday, according to the ministry.

The concerts will be the 1,500-seat East Pyongyang Grand Theater and the Ryugyong Jong Ju Yong Gymnasium, which can accommodate some 12,000 spectators, it said.

“The talks are the first inter-Korean official consultation over the South’s art troupe. I think that a list of music is likely to be mainly discussed during the meeting,” Yun Sang told reporters before heading to the meeting.

Hyon Song-wol, head of the all-female Moranbong Band, represented the North’s delegation. She crossed the inter-Korean border last month as the leader of a North Korean art troupe for performances in South Korea.

The Ministry of Unification said that Yun, 50, is deemed suitable as director of Seoul’s art group, given his expertise in diverse musical genres and the short period of preparations for the concert.

It said that in selecting the head of the art troupe, the government highly valued a person who is well-versed in the musical tastes of different generations.

It marks the first time that an entertainer has represented the South’s delegation to inter-Korean talks.

In 1985, South Korean musicians held their first concert in Pyongyang as part of cultural exchanges. In the 2000s, various Korean pop singers, including Cho Yong-pil and idol groups, performed in the North’s capital.