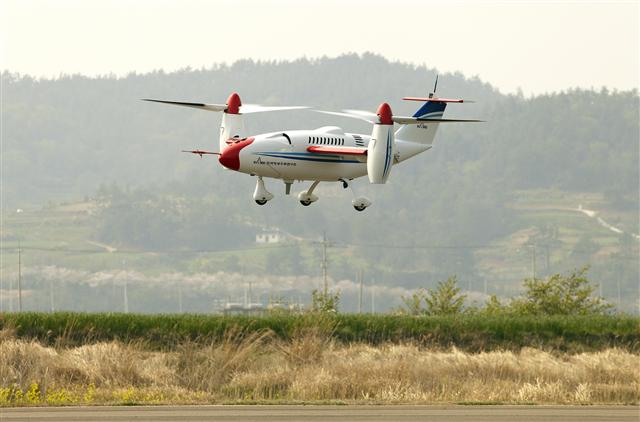 The experiment conducted by the Korea Aerospace Research Institute (KARI) and the National Institute of Meteorological Sciences (NIMS) used a 200-kilogram TR-60 drone capable of executing vertical takeoffs and landings, the Ministry of Science and ICT said.

NIMS and KARI conducted the test in controlled airspace at the Goheung Aviation Center, 470 kilometers south of Seoul.

The drone, which is capable of staying in the air for five hours, released “hygroscopic flares” composed of calcium chloride along a so-called seeding line around cloud formations, according to the ministry.

“The flares were released at an altitude of 800 meters, and to increase the chances of creating rain, the TR-60 flew three times along the seeding line at a speed of 165 kilometers per hour,” the ministry said. It said the drone released a total of 12 flares.

The experiment is noteworthy since most artificial rain is created by sending up manned aircraft that are more expensive to operate and pilot. Drones are much cheaper to operate and can be remote controlled.

The ministry said NIMS sent up one of its aircraft to monitor the test, while ground-based radar was used to see if actual weather modification occurred.

The results are to be released after a detailed examination of the data, the ministry said.