Under a so-called regulatory sandbox, fintech firms using new technologies, such as blockchain and big data, will be exempted from regulatory challenges. (image: Korea Bizwire)

SEOUL, Mar. 29 (Korea Bizwire) — There is at least one industry in South Korea where hardly a day goes by without financial authorities mentioning deregulation: financial technology, or fintech.

Since the National Assembly passed bills last September on a “regulatory sandbox,” in which fintech firms are allowed to experiment under amicable regulations, state regulators have pledged to cut red tape that could force innovative business models to become bogged down in bureaucracy.

South Korea is also counting on fintech to reinvigorate its financial industry, which has been struggling with slow growth and thin margins.

Industry executives welcomed the move, saying deregulation is essential for breathing vitality into the fintech industry.

“Helped by the government’s regulatory sandbox and other support measures, many fintech firms are expected to find a new path for innovation that has been impossible so far,” said Lee Seung-gun, founder and chief executive of Viva Republica, one of best-known Korean fintech firms.

Speaking at a meeting with senior financial regulators, fintech executives and investors in January, the 37-year-old Lee said his business dream got off the ground because financial authorities flexibly interpreted various rules.

Viva Republica was forced to shut down the beta version of its simple peer-to-peer money transfer service in April 2014 due to a murky regulation on banks’ wire transfer system. 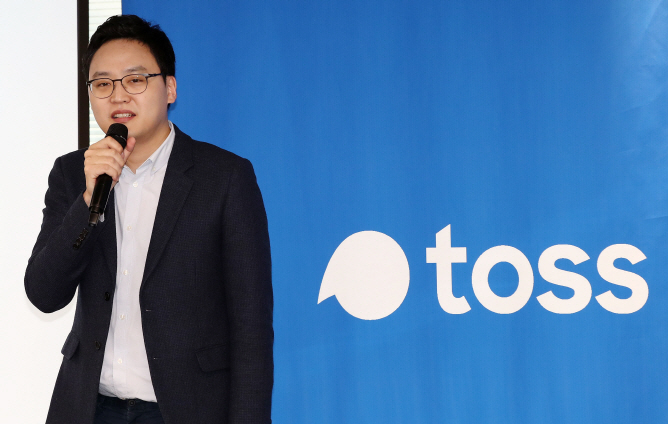 Lee Seung-gun, founder and chief executive of Viva Republica, speaks at a press conference on the company’s bid for an Internet-only bank on March 27, 2019. (Yonhap)

Today, Viva Republica has grown into a popular platform of various finance services, with the value of accumulated money transfers exceeding 30 trillion won (US$26.6 billion). This week, a consortium led by Viva Republica submitted a bid to launch an Internet-only bank.

Thanks to its user-friendly interface and convenience, the app reported 23 million downloads as of March this year. Lee told the January meeting that about 60 percent of its users were 20-somethings.

Viva Republica has attracted investments worth about 220 billion won, including 55 billion won from Paypal, the biggest online payment firm in the United States.

“In a way, things were impossible before 2015. But things became possible after 2015. Today, most fintech firms provide similar money transfer services to what Toss is offering,” the company chief said.

Choi Jong-ku, chairman of the Financial Services Commission (FSC), South Korea’s financial regulator, told the meeting that this year would be an “opportune time for the local fintech industry to take a step forward.”

“The FSC will spare no effort to support fintech companies to come up with globally competitive services and spread fintech innovation across the financial sector,” Choi said.

From April, fintech firms will be exempted from certain rules and be able to develop services without regulatory hurdles.

Under a so-called regulatory sandbox, fintech firms using new technologies, such as blockchain and big data, will be exempted from regulatory challenges. 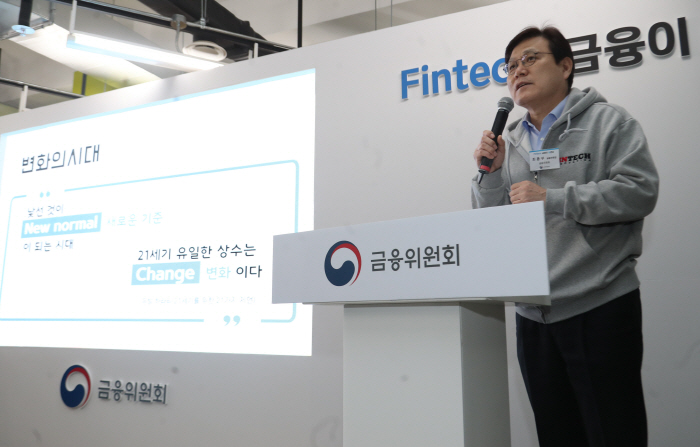 FSC Chairman Choi Jong-ku speaks at a meeting with executives from fintech firms on Jan. 16, 2019. (Yonhap)

In a fresh effort to encourage development of new payment services and greater competition in the financial sector, the FSC plans to establish an open banking system that would grant fintech firms access to banks’ payment network.

Currently, only banks can get access to the payment network, but even banks are allowed to process only their own bank account-based transactions. Although banks jointly launched a technology protocol in 2016 for an open banking system, only a small number of fintech firms can use the system with relatively high fees.

If banks fully open their payment system to fintech firms, it will allow customers to use a single application to access their accounts at different banks and make payments, according to the FSC.

Fees charged to fintech firms for using the network will be lowered to one-tenth of the current level to ensure fair competition, the FSC said.

The FSC has overhauled regulations that hinder fintech innovation. Currently, more than 200 regulations are under review for regulatory reforms, and the results of the reviews will soon be announced.

While the fintech sector is rapidly growing, it is still a nascent presence in the broader financial industry.

Some analysts said the fintech industry may have a limited impact on banks and other financial firms, but their competitiveness will improve if they cooperate with fintech firms.

Park Hye-jin, an analyst at eBEST Investment & Securities, said big banks would face only limited margin deterioration even if fintech firms are fully allowed direct access to the payment system.

“From a long-term perspective, however, cooperation between banks and fintech firms could serve as an opportunity for banks to increase their competitiveness,” Park said in a research note.

“As current capital regulations (net capital ratio) measure risk levels based on the absolute cost of business licenses, limited capital can be a huge obstacle to business expansion,” Jeong said in a report.

“In other words, firms with low capital face considerable limitations in terms of the scope of businesses they can operate. Even if these firms enter the market, competition will likely be confined to very limited areas of service,” Jeong said.