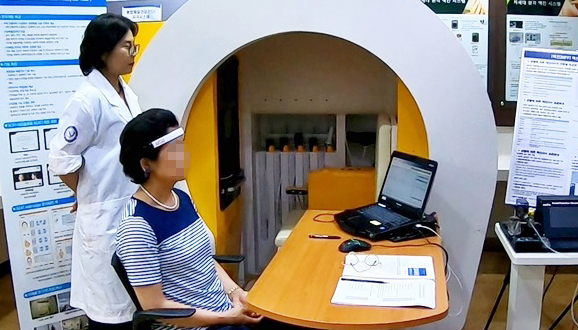 The research team focused on a brain wave test, which doesn’t require any particular surgical equipment, has no study effects and doesn’t harm the human body. (image: Korea Institute of Oriental Medicine)

The Korea Institute of Oriental Medicine (KIOM), jointly with the Human Anti-Aging Standards Research Institute (HASRI), announced on Thursday the development of a new technology that analyzes brain waves in the prefrontal cortex to distinguish the severity of dementia.

For detailed examination, intensive surveys such as the Seoul Neuropsychological Screening Battery (SNSB) are being used, but they normally take more than two hours to complete.

The research team focused on a brain wave test, which doesn’t require any particular surgical equipment, has no study effects and doesn’t harm the human body.

The research team used a brain wave measuring band to analyze the prefrontal cortex located in the forehead.

Patients with dementia demonstrated a significant drop in slow brain waves that occur during a quiescent state of mind.

“Follow-up studies will help us to determine how to diagnose early or pre-stages of dementia using these biosignals,” said Dr. Kim Jae-wook from KIOM.