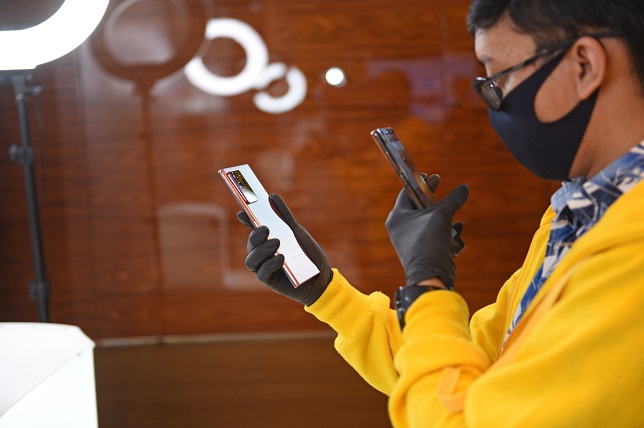 This photo provided by Samsung Electronics Co. on Aug. 21, 2020, shows a reporter checking the company’s latest smartphone, the Galaxy Note 20, at an event in Jakarta, Indonesia.

The Galaxy Note 20 series has hit shelves in some 70 countries, including South Korea, the United States, Britain and Thailand, according to Samsung.

It added that the new mobile devices will be available in 130 countries by mid-September.

The Galaxy Note 20 series, which was unveiled online Galaxy Unpacked event on Aug. 5, comes in two models — the standard Note 20 and the high-end Note 20 Ultra.

Due to the pandemic, Samsung said launching events and promotional activities will vary in each country depending on virus situations.

In South Korea, the company has been running the Galaxy Studio at five locations with enhanced quarantine measures since Aug. 8. It also opened an online platform, My Galaxy Studio, where consumers can experience the product with tech experts.

Preorders of the Note 20 turned out to be successful in South Korea as they were estimated to be similar to its predecessor, the Note 10.