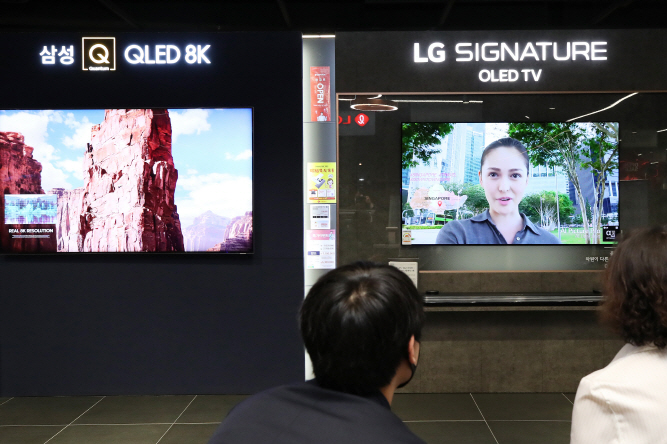 SEOUL, May 19 (Korea Bizwire) — Samsung Electronics Co.’s share of the global TV market hit an all-time high in the first quarter amid an overall market fall due to the coronavirus pandemic, a market tracker said Tuesday.

The South Korean tech kingpin accounted for 32.4 percent of the world TV market in terms of value in the January-March period, up 3.1 percentage points from a year earlier, according to Omdia, formerly IHS Markit.

The figure was also up from 32.3 percent the previous quarter. Samsung’s market share has topped the 30 percent mark for four quarters running, cementing its No. 1 status.

Samsung’s shipments of QLED TVs climbed 10.8 percent on-year to $2.05 billion in the first quarter, and the company took up 50.4 percent of 75-inch and larger TVs shipped.

Another South Korean industry, titan LG Electronics Inc., came second with a market share of 18.7 percent in terms of value, up 2.2 percentage points from a year earlier.

The South Korean TV makers recaptured the world’s No. 1 spot in terms of shipments in the first quarter after giving up the title to Chinese rivals in the third and fourth quarters of last year.

Samsung topped the global TV market for the 14th consecutive year in 2019, with a market share of 30.9 percent, followed by LG Electronics with 16.3 percent and Japan’s Sony Corp. with 9.4 percent.