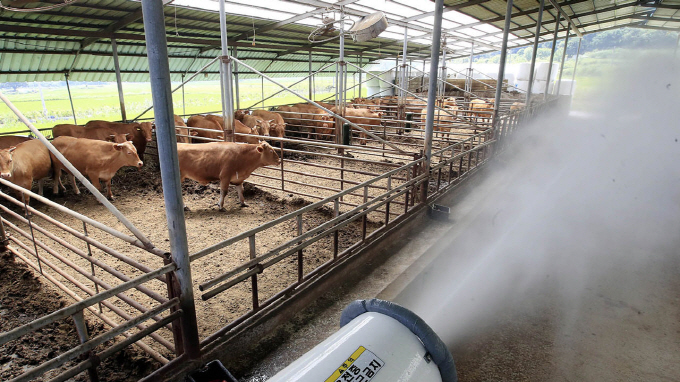 According to Nonghyup Property & Casualty Insurance, a total of 3.23 million livestock have already succumbed to the heat nationwide. Financial damages from the deaths are expected to reach approximately 17.3 billion won.

According to an official at Nonghyup, 97 percent of the reported livestock deaths took place between July 11 and 25, when temperatures spiked. During this window, 2.18 million livestock perished.

Among subscribers of livestock insurance, 95 percent are covered under policies offered by Nonghyup Insurance that offer compensation for losses from livestock in the case of natural disasters and accidents, with 50 percent of the damages paid by the central government and local governments typically forking out an additional 20 to 40 percent depending on the specific policy.

The heat wave has also affected driving conditions, with a series of tire-related insurance claims reported over the summer.

With personal vehicles increasingly popular, reports of car tire problems have increased due to the latest bout of high temperatures.

The total number of emergency roadside assistance responses provided by eight commercial insurance companies for replacing tires rose 2.3 percent to stand at 283,005 cases in June and July of this year, up from 276,626 cases last year.

The Traffic Safety Research Institute operated by Samsung Fire & Marine Insurance recently released a report that stated that the number of traffic accidents between June and August had risen by 1.2 percent when temperatures rose 1 degree Celsius.

The analysis was based on data from traffic accidents that took place from 2016 to this year. The dates for this year’s analysis include the period up until July 23.

According to the Traffic Safety Institute, in addition, the total number of traffic accidents during the period from July 1 to 23 when the heat wave was most intense this year was 193,796 cases, which was a 7.9 percent increase from the same period last year.