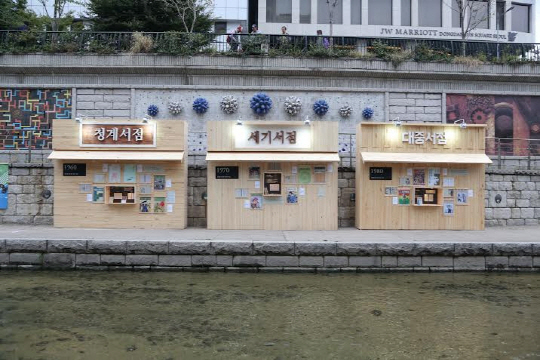 The Seoul Metro Government, Naver, a leading search portal in South Korea, and the Naver Cultural Foundation have collaborated in changing the 25 bookstore signs. (image: Naver)

SEOUL, Oct. 9 (Korea Bizwire) –As walking along Cheonggyecheon, a stream that runs through downtown Seoul, you meet many used bookstores where books are piled up like towers. Now only 25 bookstores remain, unlike 200 in their heyday, 1960s through 1970s. Moreover, there are only about 100 secondhand bookstores in the Seoul metro area.

Although the street of used bookstores, located on the first floor of Pyeongwha (Peace) Market, is a symbolic place and hidden jewel in Seoul, they barely keep themselves in existence. However, to our delight the 25 bookstores have given each store sign a brand new look with their own Korean name and are waiting for visitors.

The Seoul Metro Government, Naver, a leading search portal in South Korea, and the Naver Cultural Foundation have collaborated in changing the 25 bookstore signs in order for the public to relish the beauty of Hangul, the Korean alphabet featuring 24 consonant and vowel letters, as well as in order to restore the bookstores as cultural spaces.

“Although secondhand bookstores are cultural reservoirs that hold the history of the city and our stories, they are enduring a very difficult time to the extent that now there are only 25 secondhand bookstores near Cheonggyecheon,” said Lee, Yong-hoon, director of the Seoul Metropolitan Library.

“But I wish the collaborative efforts of Naver and the Seoul Metro Government to invigorate the secondhand bookstores in Seoul would be able to generate the hope for all of us.” he added.