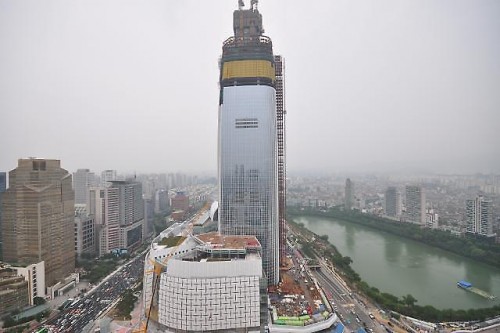 SEOUL, Jan. 5 (Korea Bizwire) – Any occurrence of additional safety accidents will lead to the shutdown of Lotte Group’s new skyscraper in the southern district of Jamsil, the city of Seoul warned Monday, after a series of safety problems escalated concerns over the recently-opened shopping complex.

The retail giant opened the completed lower parts of the 123-story high-rise in mid-October despite some lingering safety and traffic congestion concerns.In mid-December, a 58-year-old construction worker was found dead at the building where construction work is still underway to finish the uncompleted upper floors.

A series of other accidents, including an aquarium water leak as well as cracks found in underground parking lots, also raised safety worries on the posh shopping and entertainment complex.

The frequent safety issues and subsequent safety anxieties among citizens are attributable to Lotte’s inability to prevent safety hazards and to promptly respond to such accidents, the city government said.

“If (more) safety accidents occur again under the condition Lotte has not established the proper safety management and response systems, (Seoul) will take stronger punitive actions including a limitation or prohibition of the building’s use as well as a temporary revocation of (Seoul’s earlier) usage permission,” the city announced.

The city also advised the retail giant to invite experts from outside the group to beef up its safety management plan over the high-rise and to communicate with the public to allay the safety concerns.

Responding to the latest announcement, Lotte Group said that it will hold a monthly meeting with experts to fully explain the building’s safety conditions to that end.