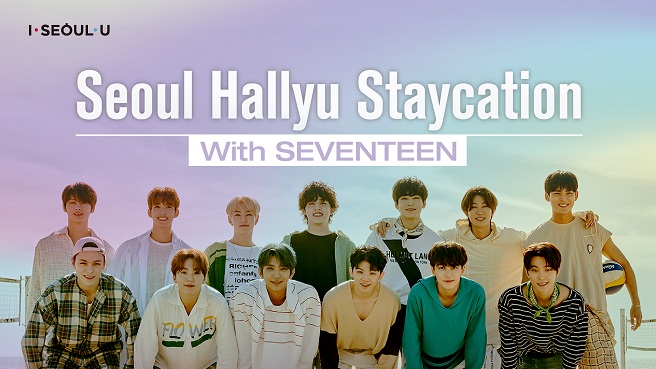 This image provided by the Seoul metropolitan government shows its online project with K-pop boy band Seventeen to introduce Korean culture to international fans of “hallyu,” the global wave of Korean pop culture.

The series, titled “Seoul Hallyu Staycation with Seventeen,” will be uploaded this Saturday and on Sept. 25, on the city’s official tourism YouTube channel, “VisitSeoulTV,” the city government said.

The videos are aimed at providing fans of “hallyu,” the global wave of Korean pop music, dramas and other television shows, a second-hand experience of Korean culture as overseas tours remain restricted due to the COVID-19 pandemic, according to the city.

The first two videos will be streamed live at 10 a.m. and 7 p.m. Saturday, respectively.

In the videos on Korean food and dramas, Seventeen members Jeonghan, Jun, Mingyu, and Vernon will communicate with fans while cooking Korean dishes often featured on Korean TV dramas and YouTube shows.

They will also share popular fashion and beauty styles of main characters in popular Korean dramas.

The rest of the series have already been filmed and will be released online on Sept. 25, according to the city officials.

“We are honored to introduce various aspects of Korean culture for all the ‘hallyu’ fans in the world,” the boy band was quoted as saying in the release. It showed hope that more people will gain interest in South Korea after watching the videos.

The city government hopes the project with Seventeen can deliver joy and lift up the mood for hallyu fans around the world who couldn’t visit the city due to COVID-19, said Lee Eun-young, an official in charge of the city’s tourism.