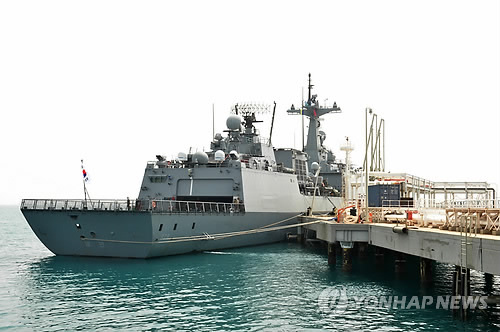 It marked the first time that a Korean diplomatic mission was set up on a warship under operation in the sea. (image: Yonhap)

SEOUL, April 5 (Korea Bizwire) – South Korea said Sunday it has opened an interim diplomatic mission on a Navy destroyer in waters off the Gulf of Aden to help support the safety of Korean residents who opted to stay in conflict-hit Yemen.

The Joint Chiefs of Staff said that an ad hoc diplomatic office was set up Friday (local time) on the warship named Wang Geon to support the remaining 23 Korean residents in Yemen following Seoul’s recent evacuation of its people.

It marked the first time that a Korean diplomatic mission was set up on a warship under operation in the sea. Wang Geon has been in charge of combating pirates off the coast of Somalia.

It said that the Cheonghae unit was ordered to provide space and communications equipment for the diplomatic office. Two Korean diplomats were moved last week to the ad hoc office.

The Cheonghae unit on the destroyer has been operating near Somali waters since early 2009 as part of international efforts to help protect ships passing through the Gulf of Aden, used by some 500 South Korean vessels annually.

A total of 13 South Koreans, including two employees at the embassy, have been evacuated from Yemen by a U.N. plane so far as security concerns heightened following airstrikes against a militant rebel group there.

On March 26, Saudi Arabia and a coalition of Gulf Arab nations launched air strikes against Shiite rebels, known as Houthis, which ousted Yemen’s government and dissolved the parliament in early February.

Before the evacuation, a total of 38 Koreans were living in four different areas, including Sanaa and Taiz, according to the foreign ministry.