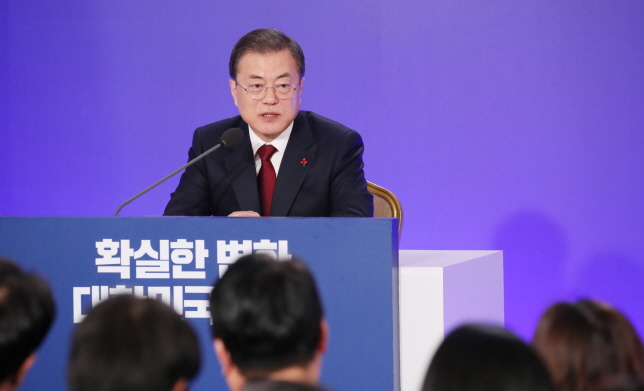 SEOUL, Jan. 17 (Korea Bizwire) — South Korea is considering allowing its people to travel to North Korea on an individual basis as part of efforts to move the stalled inter-Korean relations forward, but chances are low of the drive bearing fruit due to many intractable challenges, experts said Friday.

On Tuesday, President Moon Jae-in cited individual tours to the North as a possible way to expand inter-Korean exchanges regardless of U.N. sanctions on Pyongyang.

Moon said that expanded exchanges will ultimately be conducive to efforts to revive the stalled nuclear talks between Washington and Pyongyang.

Moon calls came as the North has ignored South Korea’s repeated calls for talks and cooperation, criticizing Seoul for dragging its feet in seeking inter-Korean projects for fear of violating global sanctions.

Experts said that individual trips to North Korea appear to be a positive step given that it could create space in inter-Korean relations and also send a message to North Korea that Seoul is making every possible effort to expand cross-border exchange despite restrictions caused by global sanctions.

“It is meaningful since proposing such a project could provide an additional option that North Korea could choose from when there is progress in denuclearization talks with the U.S. going forward,” Hong Min, a research fellow at the Korea Institute for National Unification, said.

“Our government should continue (such efforts) to signal that it is doing everything at its disposal to seek cooperation (with the North) if it wants to manage inter-Korean relations in a stable manner,” he added.

The idea of individual tours to North Korea was first broached last year as a “creative” way to salvage long-suspended tours to Mount Kumgang on the North’s east coast, after the North threatened in October to end the project suspended since 2008, when a South Korean traveler was shot dead near the resort.

The project’s formal resumption would require a sanctions waiver because it would involve bulk cash transfers to Pyongyang banned under the sanctions.

But individual tours can be pursued without concern about violating sanctions, officials said.

As part of efforts to promote individual tours, South Korea appears to be considering even allowing its citizens to visit not only the mountain resort but also other tourist destinations via a third country, such as China, as long as they acquire appropriate visas from the North.

Currently, South Koreans should have both a visa and a formal invitation in order to visit the North.

“(The government) is actively exploring (a visa-based trip to the North) on the condition that the safety (of travelers) is guaranteed,” Kim Eun-han, a deputy spokesperson of the unification ministry, said in a press briefing on Wednesday. 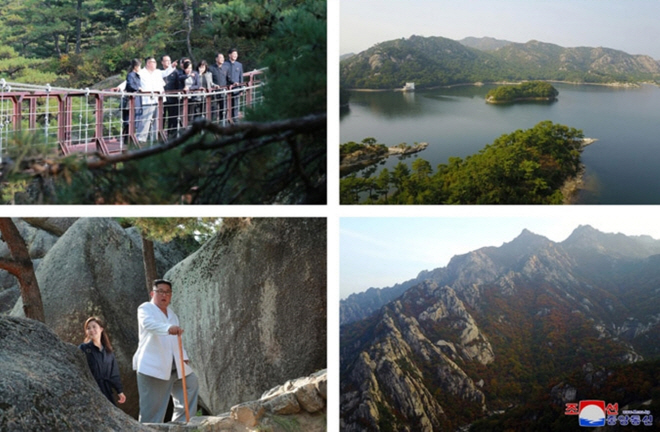 This combined image, released by the Korean Central News Agency (KCNA) on Oct. 23, 2019, shows Mount Kumgang on the east coast and North Korean leader Kim Jong-un climbing the mountain during a field tour.

Experts remained pessimistic about whether the tour project could eventually get off the ground, citing many tough challenges.

Among other things, it is unclear whether North Korea would respond to Seoul’s push for individual trips amid chilled inter-Korean relations.

“How many people would be willing to go to the North under the individual trip program … At a time when the North is pushing for the destruction of South Korea-built facilities at Mount Kumgang, it appears to be a belated attempt. Things could have been different had Seoul made a similar offer before last October,” he added.

Another sticking point is how to secure the safety of its citizens in North Korea and prevent a recurrence of such a tragedy as that seen in 2008 at Mount Kugmang.

South Koreans have to receive an official invitation from North Korea and gain state approval to visit the communist state, with which the South remains technically in a state of war since the 1950-53 Korean War ended in a truce.

Observers said that individual trips could be more prone to accidents than those at Mount Kumgang, where visitors from the South were allowed to move around only in the resort area.

No less challenging is how to enlist understanding from the U.S. at a time when Washington has remained firm that it will apply maximum pressure against Pyongyang until its complete denuclearization.

Tours to North Korea are not subject to sanctions, and Chinese and other foreigners are allowed to visit the reclusive state.

South Korea, however, has heeded concerns that money generated from such trips could be channeled to Pyongyang’s nuclear and missile development programs.

On Thursday, U.S. Ambassador to South Korea Harry Harris reiterated Washington’s position, saying that South Korea should consult with the Washington about its plans to engage with North Korea to avoid any “misunderstandings.”

“President Moon’s continued optimism is encouraging,” Harris was quoted by Reuters as saying to foreign journalists in Seoul.

“But with regard to acting on that optimism, I have said that things should be done in consultation with the United States.”

South Korea seems to be working hard to discuss with Washington its latest engagement plan with the North.

Lee Do-hoon, special representative for Korean Peninsula peace and security affairs, held talks with his U.S. counterpart, Deputy Secretary of State Stephen Biegun, in Washington on Thursday and said that the two agreed to coordinate closely on possible inter-Korean projects amid stalled nuclear talks between Washington and Pyongyang.

Adding to Washington’s firm stance, experts said that uncertain political situations in the U.S., including President Donald Trump’s bid for reelection throughout this year, could make it hard for a meaningful inter-Korean project to be successful for the time being.

“The U.S. seems to firmly believe that sanctions are an integral part of success in negotiations with the U.S. It would be hard to imagine how South Korea would persuade the U.S. (on the matter of individual trips to the North),” Hong said.

“It is also likely that the U.S. intends to maintain the status quo, steering clear of any major deal during Trump’s reelection campaign. I doubt that the U.S. would cooperate with South Korea on its envisioned tourism project that could punch a hole in its sanctions regime and affect the prospects of future negotiations with the North,” he added.