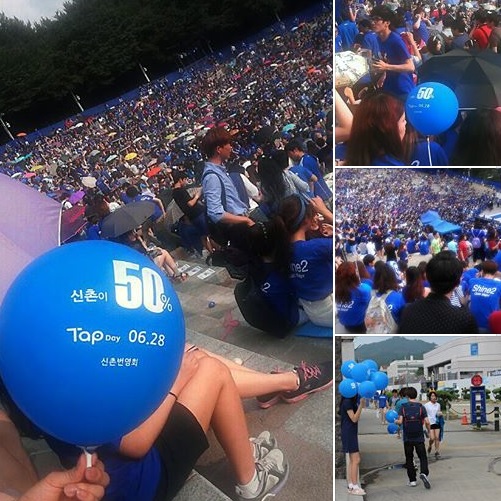 Under the slogan of “Now Sinchon Is 50% Discount,” the discount event called “Tap Day Festival” will be held on June 28. (image: SL Innovations)

Under the slogan of “Now Sinchon Is 50% Discount,” the discount event called “Tap Day Festival” will be held on June 28. In the event, some 300 stores in the area such as cosmetics road shops, drugstores, fast-food restaurants and cafés will take part. They will offer 50-percent discounts on selected items with limited quantity.

The event is powered by a new concept social crowd promotion, “TAP,” which will be introduced in late July. According to SL Innovations, developer of the service, TAP integrates strengths of social commerce and social crowd funding and applies for an entirely new method of sales.

Unlike the existing social commerce whose pre-purchasers and consumers are same, TAP uses an innovative method of on and offline sales based SNS. With this technique, consumers can purchases products easily and the merchandisers can obtain revenues in a short time.

An official at the Sinchon Co-op of Shopkeepers said, “As shop owners in Sinchon are in sympathy with the sales method of TAP and the deal for the event was achieved.”

Also, another official at the Seodaemun Small Business Association which covers the Sinchon area said, “Unlike the existing social commerce business in which shops sell their products by themselves, TAP that mobilizes the whole block of a commercial district through SNS can invigorate Sinchon, struggling to regain its reputation as ‘the Street of Youth.’”

“We will regularly hold the event to revitalize the Sinchon’s commercial area,” he added.

Surrounded by several renowned universities like Yonsei University, Ewha Womans University and Sogang University, Sinchon once was a district of youths and full of dynamism. However, due to the fast growth of the nearby Hongdae area, Sinchon is now suffering from years of stagnation.

Kim Hyeong-nam, CEO of SL Innovations, said, “We prepared the tour of TAP day festivals rounding best-known commercial areas in Seoul starting from Sinchon to publicize the potential power of TAP service. In late July when our last TAP day festival in Gangnam will be finished, we will officially launch the nationwide TAP service.”