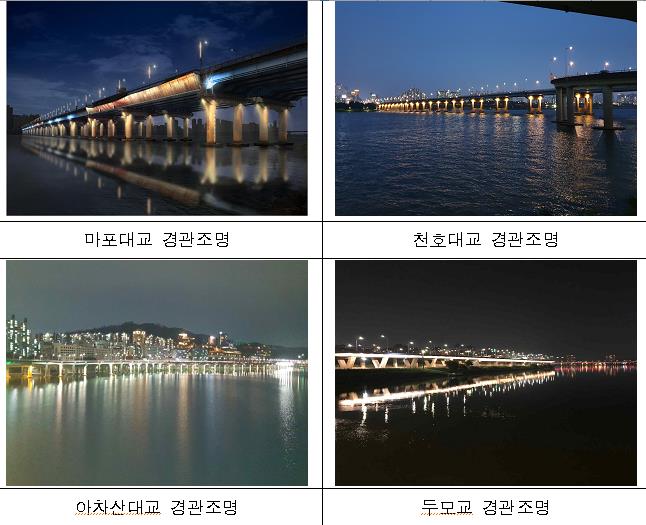 This composite image, provided by the Seoul city government on June 30, 2021, shows four bridges straddling the Han River in Seoul lit up at night.

SEOUL, June 30 (Korea Bizwire) — Six more bridges straddling the Han River in Seoul will be lit at night from July, adding to the 20 bridges that already have nocturnal lighting features, the city government said Wednesday.

The 26 bridges, including the newly fitted six — Achasan Bridge, Mapo Bridge, Cheonho Bridge, Dumo Bridge, Seoho Bridge and Noryang Bridge — will glow from 15 minutes after sunset to midnight during the next three months.

There are 29 bridges across the lifeline of Seoul, but the remaining three have not been installed with light fixtures because of their proximity to wild bird protection zones, among other reasons, according to the metropolitan government.

From July to September, nine fountains at Han River parks, including the recently renovated Banpo Bridge Moonlight Rainbow Fountain, will be in normal operation as well.

“We decided to light up the bridges and turn on the fountains in line with the eased social distancing rules set to take effect next month,” the city government said, adding that it will offer various attractions to people worn out from COVID-19.

Starting Thursday, the revised guidelines will allow private gatherings of up to six people in the capital area, while restaurants, cafes and bars will be able to stay open until midnight.