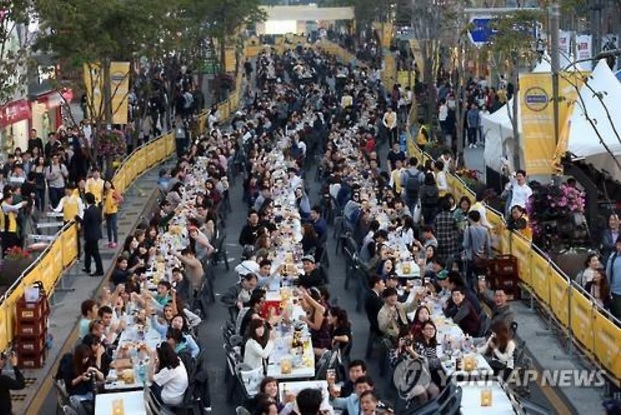 Last year, the festival set a record with 3,619 people drinking a toast at once. Merchants and neighborhood residents participated in planning the festival again this year. (image: Yonhap)

SEOUL, July 12 (Korea Bizwire) – The second Sinchon Beer Festival will be held on Yonsei-ro, Sinchon this Thursday and Friday, July 14 and 15.

The beer festival, which was first held last October to boost the economy in the Sinchon area, will feature a sandy ‘beach’ and pubs keen to evoke the feeling of enjoying drinks on vacation.

Last year, the festival set a record with 3,619 people drinking a toast at once. Merchants and neighborhood residents participated in planning the festival again this year.

The festival will kick off on July 14 at 7 p.m. During the opening ceremony, Korean heartthrob Song Joong-ki will make an appearance as the public face of Hite-Jinro, a festival sponsor. There will also be keg-opening performance and a crowd wave of participants downing their drinks.

Some snacks will be provided, but festival-goers will probably prefer to order food such as pizza and fried chicken from restaurants close by for delivery.

“We hope the Sinchon Beer Festival will revitalize local markets and become one of the well-known local festivals to attract many domestic and international tourists,” said Moon Seok-jin, head of the Seodaemun District Office.

Festival details are being provided on the Seodaemun District blog (http://tongblog.sdm.go.kr), and the District Office (02-330-1672) can be contacted for other inquiries or information.

Tickets can be purchased on online shopping malls or at an on-site ticket office during the festival.

The festival will be postponed in case of rain.