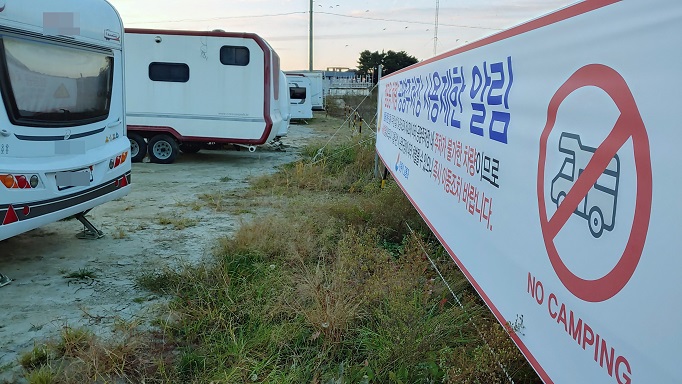 Campers are parked at a public parking lot near Gyeongpo Lake in Gangneung on the east coast on Nov. 3, 2020. (Yonhap)

GANGNEUNG, Nov. 4 (Korea Bizwire) — Public parking lots at many famous beaches on the east coast are beleaguered by a growing number of squatting campers, officials and residents said Wednesday.

Public parking lots along the east coast, one of the nation’s most popular travel destinations, are run free of charge by local governments for beach tourists and short-term visitors.

But hordes of camper vans squatting in seaside public parking lots in Gangneung, 240 kilometers east of Seoul, and other east coast cities and towns are irritating the nerves of local officials and residents, while causing inconvenience to other beach visitors.

At a public parking lot close to Gangneung’s famous Gyeongpo Beach and Gyeongpo Lake, long lines of long-staying campers are incurring the resentment of both citizens and tourists looking for parking spaces.

“I thought the camper vans would leave when the summer vacation season is over, but they’re still there,” a Gangneung citizen surnamed Park grumbled.

“The long-staying campers are not only obstructing the use of the public parking lot but also raise concern that something unpleasant may occur.”

At another scenic beach in Gangneung, its public parking lot was closed after the summer vacation season was over, but many campers are still parked along the edge of the sandy beach.

Local residents have persistently asked the camper owners to move to nearby campgrounds but to no avail. 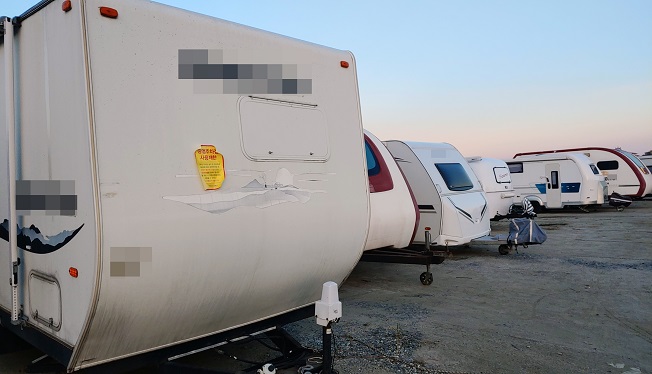 Campers are parked at a public parking lot near Gyeongpo Lake in Gangneung on the east coast on Nov. 3, 2020. (Yonhap)

Despite rising public complaints against squatting campers, however, local governments currently have no legal means to restrict the extended use of public parking lots by campers, which are classified as vans or trucks.

Thus, there is little for the local governments to do except to hang warning banners or put warning stickers on long-staying campers at beachside car parks.

Despite such efforts, however, the problem has not been resolved.

As part of the solution, there have also been mounting calls for the expansion of existing campgrounds, though resources are limited.

The Solhyang Camping Site in Gangneung, for instance, has some spaces for campers, but they are always fully booked, forcing many camper drivers to head to seaside public parking lots.

“Due partly to the spread of the coronavirus, many campers are using public parking lots for a long period of time. We’re asking them to relocate, but we’re running into difficulties due to the absence of legal grounds to restrict their long-term parking,” a Gangneung city government official said.

“The central government has to devise countermeasures, as almost all local governments across the country are grappling with similar problems.”