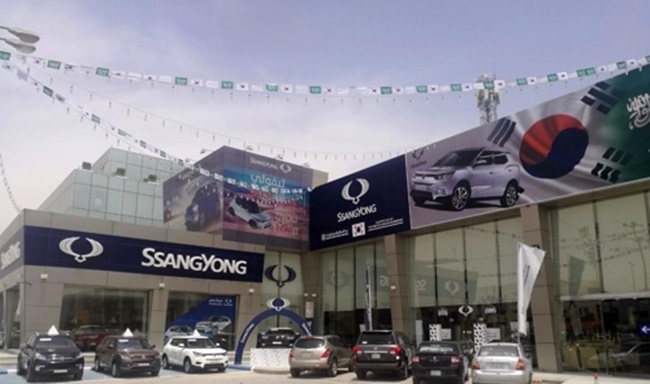 The sport utility vehicle-centered carmaker withdrew from the oil rich country in 2013 but the following year it began preparations to reenter it, a company spokesman said, without giving the reasons of the withdrawal. (Image: Yonhap)

SEOUL, May 17 (Korea Bizwire) – SsangYong Motor Co., the South Korean unit of India’s automaker Mahindra & Mahindra Ltd., said Wednesday it has reentered Saudi Arabia after a four-year absence, as part of its efforts to expand into the Middle East market.

The sport utility vehicle-centered carmaker withdrew from the oil rich country in 2013 but the following year it began preparations to reenter it, a company spokesman said, without giving the reasons of the withdrawal.

Early this week, SsangYong Motor opened a showroom in the capital city of Riyadh to initially sell its Tivoli and Korando SUVs, the company said in a statement.

It came after the carmaker signed a contract with Abdullah Saleh Al Bazie Automotive, a local car dealership, early this year to export its flagship SUVs to the kingdom, it said.

To make further make inroads into the untapped market, SsangYong had taken further steps in February by signing a license contract with a local car manufacturer.

Under the deal, Saudi National Automobiles Manufacturing Co. (SNAM) will receive complete knock-down (CKD) units of the fully revamped model (now called project name Q200) of the Korando Sport from SsangYong’s plant in South Korea and assemble them into complete vehicles from 2020 onwards at its factories for local sales, the spokesman explained.

CKDs are complete kits only needing to be assembled to be driven. Carmakers often ship their products in the form of CKDs due to delivery efficiency or to skirt import restrictions.

“The G4 Rexton SUV will also be available in the Middle East sooner or later,” he said. The flagship SUV went on sale this month in SsangYong’s home market, with exports to begin later this year.

SsangYong exported a total of 52,200 vehicles for the whole of last year. Of them, 10,519 units, or 20 percent, were sold in Iran and other Middle Eastern markets, the company said.

Mahindra & Mahindra owns a 72.85 percent stake in SsangYong Motor. It is the flagship affiliate of Mahindra Group, an $18 billion Indian conglomerate with businesses that range from the country’s largest SUV maker to farm equipment and financial services.