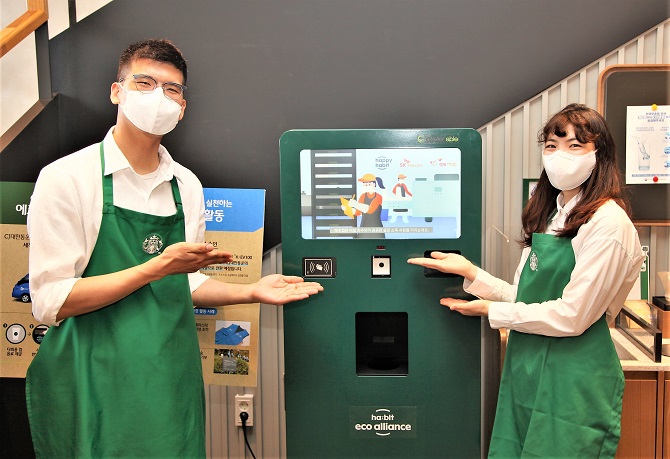 In this photo provided by Starbucks Korea, models pose for a photo at its outlet in Jeju Island to advertise reusable cup deposit system.

SEOUL, June 3 (Korea Bizwire) — Starbucks Korea said Wednesday that it plans to discontinue the use of disposable cups at four of its stores on the southern resort island of Jeju from next month.

On Wednesday, the local unit of the U.S. coffee giant signed a pilot program cooperation agreement with the Ministry of Environment and the Jeju provincial government.

Under the terms of the agreement, Starbucks will introduce the nation’s first ‘reusable cup deposit system’ that virtually prohibits the use of disposable cups.

Customers have to pay a small deposit of 1,000 won (US$0.90) for a reusable cup when they buy beverages (excluding those who use personal cups).

They get their deposit back if they return the reusable cup at contactless return kiosks installed in Starbucks outlets or at Jeju Airport.