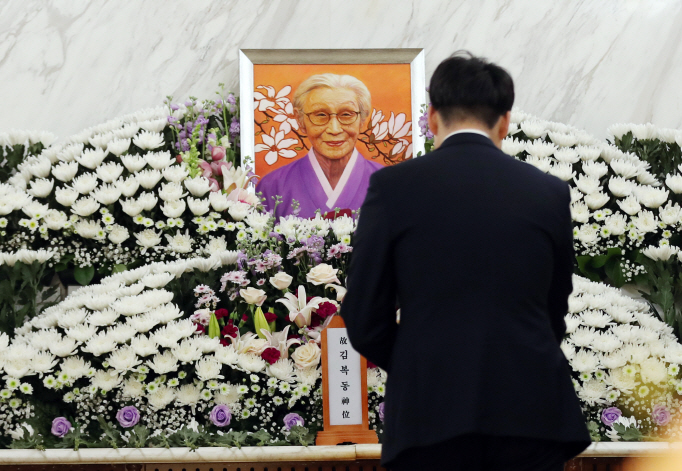 A portrait of Kim Bok-dong, a late victim of wartime sexual enslavement, is shown in this photo taken on Jan. 29, 2019, at a memorial altar set up in the funeral hall of Yonsei Severance Hospital in western Seoul. Kim passed away late Monday at age 93. (Yonhap)

SEOUL, Jan. 29 (Korea Bizwire) — The South Korean government on Tuesday mourned the death of a victim of Japan’s wartime sexual enslavement well known for her efforts to raise public awareness on the issue.

Kim Bok-dong died at 10:41 p.m. on Monday at Yonsei Severance Hospital in western Seoul, according to the Korean Council for Justice and Remembrance (KCJR). She was 93. She had been battling cancer.

“It’s regrettable that Kim Bok-dong, who had suffered agony as a victim of Japanese troops’ comfort women system, has passed away,” foreign ministry spokesman Noh Kyu-duk said at a press briefing. “(We) pray for the repose of the deceased.”

Foreign Minister Kang Kyung-wha plans to visit a mortuary in person to express her condolences later in the day or on Wednesday, he added. 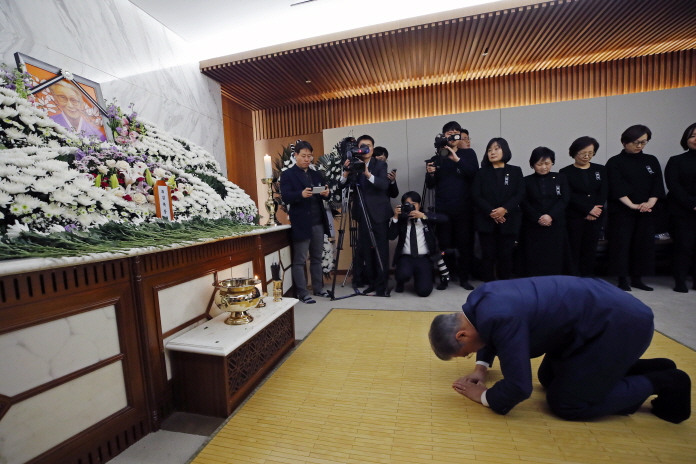 President Moon Jae-in bows before a picture of Kim Bok-dong, a former South Korean sex slave of the Japanese military who died at the age of 93, while visiting a funeral hall set up at a Seoul hospital on Jan. 29, 2019, to pay his respects to the deceased. (Yonhap)

Hundreds of people have already been seen rushing to the funeral hall set up at the Seoul hospital to pay their final respects to Kim.

Among them was President Moon Jae-in, who wrote in the visitors’ log, “Fly away like a butterfly.”

The president did not offer any comments for the public, but his visit itself was widely seen as a call for what many South Koreans believe to be a long overdue apology from Japan for its war atrocities that also include putting hundreds of thousands of Korean men into forced labor.

Moon earlier wrote on his SNS accounts that he will “never forget (give up) setting history right.”

“(I) will fulfill my duty to the remaining 23 victims of sex slavery,” he added.

Kim’s death brings the number of survivors of Japan’s sexual slavery during World War II down to 23. It came only hours after another elderly victim’s passing early Monday.

“Her last words were: ‘Please fight this out until the comfort women issue is resolved. Continue the support on my behalf for young ethnic Koreans in Japan,’” Yoon Mi-hyang, the head of the KCJR, told reporters.

“There was also an outburst of wrath (toward the Japanese government) before she took her last breath,” Yoon added.

Kim is considered a symbolic figure in Korea and worldwide for her monumental work in disseminating the truth about sexual enslavement and her active role in promoting women’s rights issues, especially for those who have experienced wartime sexual violence in recent decades.

She has strongly condemned Japan for not making a sincere apology, demanding that it compensate the victims for their suffering.

Kim came out with her own confession as an ex-sex slave in 1992, a year after the late former sex slave Kim Hak-soon testified publicly for the first time. Kim then traveled to various places in Europe, the United States and Japan to share her painful story. 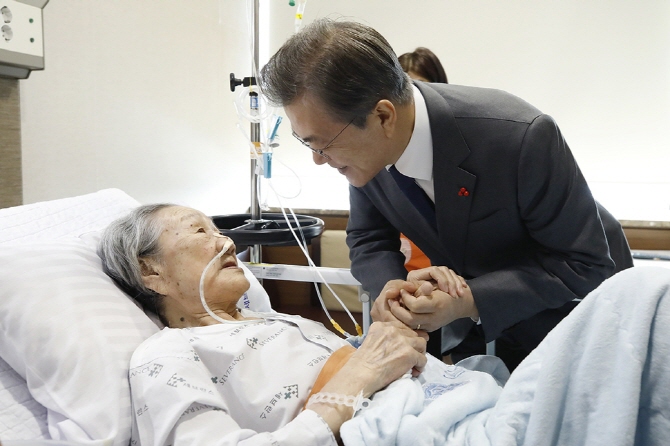 President Moon Jae-in talks with Kim Bok-dong in her room at the Yonsei Severance Hospital in Seoul on Jan. 4, 2019. (image: Cheong Wa Dae)

She also spent most of her later years advocating for the anti-war movement and campaigning for women’s rights issues, especially for those who experienced wartime sexual violence in recent decades.

“I am very much well aware of their agonizing pain. … I want to help these women in many parts of the world who have been sexually violated,” she told a press conference in March 2012.

Kim was also a generous donor. She made donations worth tens of millions of won each to Japan-based schools set up for ethnic Koreans, as well as to victims of civil war and armed conflicts. She had 1.6 million won (US$1,430) left in her bank account.

“She was the symbol of the numerous victims of sexual enslavement and a human rights and peace activist who fought to get Japan’s sincere apology and compensation,” the council said in a statement earlier.

“It is so sad that she passed away without ever receiving an apology from Japan. It’s even more heartbreaking to think that she barely missed one Wednesday protest rally near the Japanese embassy,” one of the comments read.

Another comment called for Japanese Prime Minister Shinzo Abe to atone for the country’s wartime atrocities and faithfully seek forgiveness.

As many as 200,000 Asian women, mostly Korean, were forcibly sent to front-line brothels from 1939-1945 to provide sex services for Japanese soldiers. Korea was then a colony of imperial Japan, whose aggressive human rights abuses during the war remain an unresolved international issue.

A funeral service hosted by the council will take place near the Japanese embassy at 10:30 a.m. Friday. A memorial altar has been set up in the funeral hall of the Yonsei hospital.

A native of Yangsan, South Gyeongsang Province, in the country’s south and born the fourth of six daughters, she was coerced into working at a military brothel in 1940, when she was 14.

Her older sisters got married to avoid the forced mobilization. Kim was staying with her mother and two younger sisters until Japanese authorities came to kidnap her. The authorities told her she would work in a factory, threatening that her family would suffer if she didn’t go.

She was then sent to Taiwan, China, Malaysia, Hong Kong, Indonesia and Singapore to serve Japanese soldiers.

“Sometimes I dream about the difficult times,” she recalled.