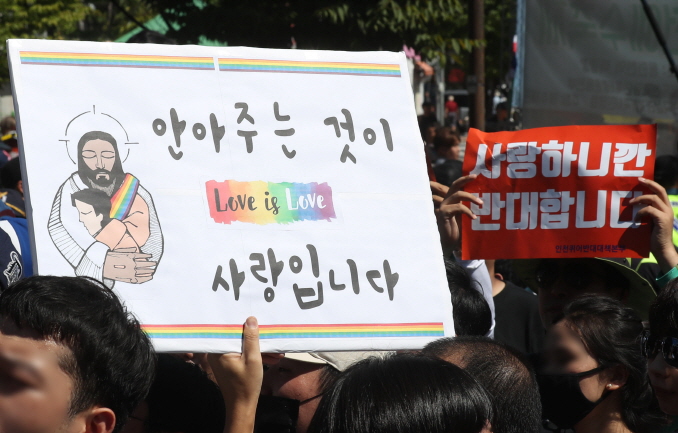 LGBT participants and religious groups clash at the Incheon Queer Culture Festival on Sept. 9, 2018. A sign bearing rainbows reads “To love is to embrace” while a red opposition sign reads “We oppose because we love.”(Yonhap)

SEOUL, Aug. 30 (Korea Bizwire) — Tension grew in the South Korean port city of Incheon Friday, one day ahead of a local LGBT festival, as conservative civic groups are expected to hold opposition protests.

The Incheon Queer Culture Festival is scheduled to take place in Incheon, just west of Seoul, Saturday with human rights groups and embassies running booths for the annual event, according to the organizers.

A 1.7-kilometer parade will also be held.

However, tension is building as religious groups and conservative civic groups are expected to hold rallies targeting the LGBT community.

Last year’s event, the first of its kind to be held in Incheon, fell through as the two sides clashed.

More than 1,000 people, triple the number of LGBT participants, shouted slogans and held pickets reading “We oppose because we love.”

The festival committee voiced concerns over opposition rallies and pledged to proceed with this year’s festival.

“We will make sure that Aug. 31 can be a day when sexual minorities and the people (of Incheon) can be themselves and raise their voices on the human rights of social minorities,” they added.

The LGBT community is a minority in South Korea where a quarter of the population identify themselves as Christians.

Protestants and Roman Catholics accounted for roughly 28 percent of the population, according to 2016 census.

While homosexuality is not illegal in South Korea, same-sex marriage is not legally recognized.